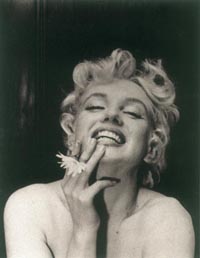 To Marilyn, New York meant the Actors Studio, where she was intent upon improving her skills and proving herself as a dramatic actress.

By the summer of 1955, Marilyn was living in her New York apartment in the Waldorf-Astoria Towers. New York City represented a new life for her. She acquired new friends who respected her, new business associates who understood her desires to showcase her dramatic skills, and a new romance -- with playwright Arthur Miller.

Marilyn had first met America's premier playwright in 1950, while on the set of As Young as You Feel. Though distraught at the time over the death of Johnny Hyde, Marilyn was honored to meet both Miller and director Elia Kazan.

Actor Cameron Mitchell, who had costarred in the stage and film versions of Miller's Death of a Salesman, introduced Marilyn to the famous dramatist and the prominent director. A few days later, Marilyn ran into Miller at a Hollywood party, where the two struck up a friendship.

Even at this time, Marilyn was quite taken with Miller. She supposedly gushed to Natasha Lytess, "It was like running into a tree! You know -- like a cool drink when you've got a fever. You see my toe -- this toe? Well he sat and held my toe and we just looked into each other's eyes almost all evening."

The beautiful starlet and the wiry playwright exchanged letters and phone calls for some months, but Miller's marriage to college sweetheart Mary Slattery prevented any serious involvement.

When Miller heard that Marilyn had moved to New York City, he obtained her phone number from a mutual friend, and the two began secretly dating in 1955. Despite the fact that he was still living at home with his family, it was obvious that Miller's marriage was in trouble -- if not over -- by this time.

If questioned about their relationship by a nosy reporter, the two quipped that they were just friends, but those who knew Marilyn claimed that she had had her sights set on Miller for some time.

Though she did not set foot on a movie set from the fall of 1954 to the early months of 1956, Marilyn was quite busy in New York. She frequented bookstores and boutiques, visited her Hungarian analyst several times a week, and attended acting classes at the famed Actors Studio.

Often, she was followed around the city by a group of ardent young fans who called themselves the Monroe Six. Consisting of a half-dozen teenagers just out of high school, the Six always seemed to be lingering near the foyer of her apartment building. They often figured out her schedule for the day, an accomplishment that both amazed and amused Marilyn.

Eventually, each of the Monroe Six met their idol as well as many of Marilyn's friends and companions. Together with another fan, a lone wolf named Jimmy Haspiel, the Six put together a mass of off-the-record data on Marilyn's New York period -- clippings, personal photographs, home movies, eyewitness remembrances -- that would prove invaluable to later biographers.

These dedicated fans respected Marilyn's privacy, never interfering with her errands or daily routine, and Marilyn was touched by their adoration. After she married Arthur Miller, she threw a party for them at Miller's Connecticut farm.

Learn more about Marilyn's time with her new mentor Lee Strasberg at the Actors Studio on the next page.