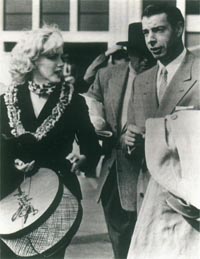 On January 14, 1954, Marilyn and Joe DiMaggio were married. Here, the honeymooners at Tokyo International Airport.

Marilyn: "It was so wonderful, Joe. You've never heard such cheering."

Joe: "Yes, I have." -- MARILYN MONROE TO JOE DIMAGGIO, AFTER ENTERTAINING THE TROOPS IN KOREA, 1954

After the unsatisfying experience of River of No Return, Marilyn began to worry about the quality of the films she would be assigned in the future. Seeking control over future roles as well as a better salary, she tried to renegotiate her contract in the fall of 1953. Zanuck refused.

Marilyn then requested a role in an upcoming drama titled The Egyptian. Instead, the studio assigned her to a lightweight B-musical with the tentative title The Girl in Pink Tights (also known as Pink Tights).

Marilyn's costar on this fluffy musical comedy was to be Frank Sinatra, who would receive $5,000 per week while working on the Fox lot. Though Marilyn was indisputably the bigger star at the time, she was still earning only $1,500 per week.

Tempers flared when Marilyn demanded a copy of the script to read before she would agree to step before the cameras. Zanuck refused, standing firm in his belief that Marilyn was under contract and should simply do as she was told.

The studio ordered her to report for the first day of shooting on December 15, 1953. This time, Marilyn refused, and Twentieth Century-Fox suspended her.

According to some accounts, the studio relented at one point in the feud and sent her a copy of the script. When Marilyn discovered that the story was a trite one revolving around a schoolteacher turned saloon dancer, she notified Fox that her participation in The Girl in Pink Tights was out of the question.

The studio threatened to dismiss her, spreading rumors that a dynamic blonde dancer named Sheree North was being groomed to replace her. Apparently unfazed, Marilyn responded by marrying Joe DiMaggio on January 14, 1954.

Reportedly, DiMaggio had asked Marilyn to marry him several times, but she had turned him down. Rumors had been flying for several months, speculating on when the couple involved in the storybook romance would finally take the plunge.

Though others have claimed in the recent past to have dated Marilyn during her courtship with DiMaggio, no solid proof exists that she was serious about anyone except the famous Yankee Clipper.

DiMaggio had always tried to protect Marilyn from the machinations of the studio executives; finally, during this battle of wills between Marilyn and Twentieth Century-Fox, he succeeded in pulling her away from their iron grip.

Marilyn garnered a lot of public and media support as a result of her marriage to an American idol. A few days after the wedding, Fox relented and told Marilyn all would be forgiven if she came back to work. A truce was finally worked out in which Marilyn's salary was adjusted and The Girl in Pink Tights permanently shelved.

Marilyn had promised Fox publicist Harry Brand that if she and DiMaggio decided to marry, he would be the first to know. True to her word, she called him on the morning of January 14. Brand, in turn, notified everyone else, including all the news services.

The hallways of the courthouse in San Francisco, where the two said their vows, were jammed with photographers and reporters. A crowd of more than 500 quickly gathered outside, trying to catch a glimpse of the fairy-tale couple. If DiMaggio had thought he could shield their private life from the watchful eye of the public and press, he was sadly mistaken.

After a few days in Palm Springs, the DiMaggios left for Japan on their honeymoon. Joe had planned to combine their trip with some baseball business with partner Frank "Lefty" O'Doul.

At Tokyo's International Airport, the massed fans, photographers, and reporters were so manic in their enthusiasm for Marilyn and Joe that the couple had to scramble back into their airplane. The honeymooners managed to escape a short time later through the baggage hatch.

The temperatures in Korea were bitter cold during the four days Marilyn performed, but she said later that she felt only the warmth of the adoring soldiers.

Marilyn was the number-one foreign box-office draw in Japan at that time, and fans pushed each other into hotel pools, broke plate glass windows, and jammed themselves into revolving doors in frantic efforts to see "the Honorable Buttocks-Swinging Actress," as she was referred to by the Japanese media.

If DiMaggio was unhappy at the constant barrage of attention aimed his way, he must have been livid at the suggestive questions the Japanese press hurled at Marilyn during a press conference.

One reporter asked her opinion of the Kinsey report on female sexuality, and a photographer ungraciously inquired if she slept in the nude. Another illustrious member of the news media wanted to know if she wore underwear.

Frantic fans and rude reporters aside, Marilyn spent much of her time in Japan relaxing. At a cocktail party in Tokyo, a high-ranking American Army officer asked Marilyn if she would consider entertaining the troops stationed in Korea. Marilyn was thrilled at the request, though DiMaggio was concerned about the potential danger involved.

The new bride decided in favor of Uncle Sam and interrupted her honeymoon to be airlifted by helicopter to Korea. Though some versions of this story suggest that Marilyn left for Korea over DiMaggio's serious objections, other accounts indicate that he merely voiced disapproval over her decision.

Whatever the case, Marilyn's side trip did become a point of contention between the newlyweds.

Marilyn would say more than once in her life that the adulation she felt in Korea by the servicemen -- a group of fans who had helped make her a star -- was the high point of her career. As she performed before thousands of troops in bitter cold temperatures, wearing only a scanty, plum-colored dress, she acknowledged her debt to them as they warmed her with their unconditional adoration.

She sang "Diamonds Are a Girl's Best Friend," "Bye, Bye Baby," and "Do It Again," interrupting her performance to crack jokes with the soldiers about their fondness for sweater girls. "You fellas are always whistling at sweater girls," she teased. "Well, take away their sweaters and what have you got?"

Marilyn returned to Japan from her exhausting four-day trip with a 104-degree temperature and a slight case of pneumonia. DiMaggio nursed her back to health before the couple continued their honeymoon, touring some of Japan's smaller villages.

Like the eye of a hurricane, this peaceful interlude lulled the couple into thinking the worst of the storm had passed. Find out what happened when the couple returned to the States in the next section.