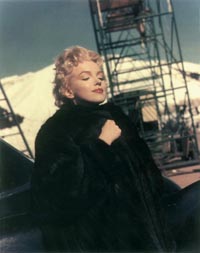 Marilyn stood behind Miller during his problems with Congress, despite pressure from Fox that it could hurt her career.

After the completion of Bus Stop, Marilyn returned to New York amid much speculation that she and Arthur Miller would soon marry. Miller had obtained a divorce from Mary Slattery in Reno, Nevada, while Marilyn had been officially divorced from DiMaggio since November 1955.

Marilyn would soon be flying to London to begin work on her next film, and Miller had applied to regain his passport to accompany her. Holding up Miller's passport and complicating the marriage plans was a subpoena to appear before the House Un-American Activities Committee.

Miller was subpoenaed by HUAC in June 1956, but his passport had been invalidated in 1954 because of suspected Communist leanings. His request for a new passport brought his name before HUAC once again; Congressman Francis Walter wanted Miller to testify about the alleged misuse of passports by American citizens.

Angered at this petty invasion of privacy, Miller accused Walter and the Committee of trying to capitalize on his relationship with Marilyn Monroe in order to increase publicity about HUAC's mission.

Though a formidable group in the early 1950s, HUAC had lost much of its bite after the Red-baiting Wisconsin senator Joseph McCarthy finally overstepped the bounds of propriety in 1954, and was censured by a Special Senate Committee.

The media had become less attentive without the headline-hungry senator around to stir things up, but Francis Walter was determined to press forward. He responded to Miller's accusations by trying to force the left-leaning playwright to identify the persons with whom he had attended a Communist meeting in 1947.

During the proceedings Marilyn supported Miller both privately and publicly, telling newsreel reporters that she believed her future husband would win his case.

Miller was willing to sign a statement declaring that he was not and never had been a Communist, but he refused to inform on his friends or fellow writers. HUAC cited him for contempt of Congress, but Miller's contempt trial would not take place until the following year.

Meanwhile, a wave of worldwide support for the acclaimed playwright from prominent artists and statesmen indicated to the State Department that HUAC's decision could hurt American credibility abroad. The State Department ordered the passport division to issue Miller a passport -- quickly.

Years later, Marilyn would reveal that a certain executive from Twentieth Century-Fox -- probably president Spyros Skouras -- had pressured her to persuade Miller to cooperate with the Committee. When she told the executive that she stood firm behind Miller and his beliefs, he warned her that she could be through in the film industry.

The executive's threats proved idle, however, because Marilyn's popularity eclipsed whatever slight damage that may been done by her indirect link to HUAC's investigation of domestic communism.

Between Miller's problems with Congress and the possibility of marriage between the Beauty and the Brain, the media attention hurled at Miller and Marilyn in the summer of 1956 became unbearable.

Photographers camped out at Marilyn's apartment building in New York, ambushing her as she entered and exited. "Leave me alone, fellas," she would implore, as photos of her in old clothes and without makeup would be wired to papers across the country.

Once a reporter attempted to rationalize his conduct to Miller by declaring, "We only bother you about this because people want to know." Miller's answer seemed to encapsulate his relationship with the press for the next few years: "It is your job versus my privacy. That's a remorseless conflict."

It was a conflict that Marilyn would come to know only too well in the years ahead. The press coverage would only continue, especially as Marilyn and Miller got set to marry. Learn about this time on the next page.