Marilyn Monroe and the Actors Studio 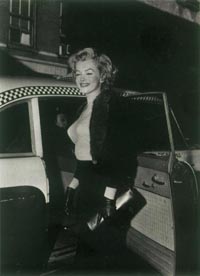 Marilyn arrives at the Actors Studio.

Much of Marilyn's time during this period was taken up with her burning ambition to become a serious actress, a goal shared by her new mentor Lee Strasberg.

Marilyn had been introduced to Strasberg in early 1955 by Cheryl Crawford, a producer/director who was one of the founding members of the Actors Studio. Marilyn had confided in Crawford her intention of developing her dramatic skills, and Crawford had insisted she meet Strasberg.

Lee Strasberg had been the artistic director of the Actors Studio since 1948 and had gained worldwide acclaim for the Method, a highly disciplined approach to acting based on the teachings of Konstantin Stanislavsky.

Strasberg had also belonged to the legendary Group Theatre, which served as an actors' training ground as well as a stage company known for its leftist politics and socially meaningful productions.

Though the Actors Studio grew out of the Group Theatre, it was not really an extension of it. The Studio only vaguely recalled the leftist political orientation that the Group had embraced wholeheartedly.

Several former members of the Group Theatre would be called before the House Un-American Activities Committee (HUAC) in the early 1950s and accused of having Communist ties. The political background of the Group Theatre and the paranoia of HUAC would eventually affect Marilyn in a direct way.

Arthur Miller, who had known several members of the Group Theatre, would be subpoenaed to testify before HUAC, and a Fox executive would pressure Marilyn about her association with him.

Because of her brief association with the Actors Lab in the late 1940s, Marilyn had already been exposed to some of the acting ideas advocated by Strasberg. Morris Carnovsky, who operated the Lab, had been a member of the Group Theatre and also used the teachings of Stanislavsky as the basis for his own approach to acting.

Despite those biographers and former associates who claim that Marilyn was lured by Strasberg and his wife Paula into the Actors Studio and brainwashed with the Method, Marilyn had leaned toward the Stanislavsky approach as far back as her affiliation with both Carnovsky in the late 1940s and Michael Chekhov in the early 1950s.

Stanislavsky had encouraged his pupils to examine their inner selves when attempting to understand their characters. According to the great Russian teacher, an actor should use his or her own past experiences and inner feelings to try to experience the emotions that the character will go through during the course of the play. The actor, in essence, emotionally lives out the experiences of the character.

Lee Strasberg pushed the concept of the inner self a step further. He encouraged his students to not just act the role, but to be the character -- to feel the same emotion the character feels and to live the experiences of the character.

To arrive at that level of performance, Strasberg advocated the actor's total involvement with his or her self, as well as the actor's complete understanding of his or her motivations and inner feelings.

Considering Marilyn's lifelong desire to uncover her identity, her disdain for those who confused her image with her true self, and her search for some inner peace regarding her worth as an individual, her attraction and ultimate devotion to Strasberg's teachings are understandable.

Strasberg regarded Marilyn's heightened sensitivity as a remarkable trait, especially considering her tragic childhood and her struggles in Hollywood. He believed her sensitivity and her luminous quality indicated a talent or gift that could be brought out through training.

He worked with her privately for three months at his apartment, tutoring her on the ability to grasp what was happening inside the character she was playing and then recreate that emotion inside herself. He also improved her powers of concentration.

In addition to her class, which met twice a week, she sat in on other sessions at the Studio just to observe. Though she was terrified by performing in front of her class, she managed to work up a scene from Anna Christie for an audience of Studio members. Many were astonished at her skill and amazed at her depth.

Lee Strasberg has been quoted as saying that the two greatest acting talents he worked with were Marlon Brando and Marilyn Monroe. The statement is a testament to his faith in Marilyn, particularly in light of the heavyweight talents who studied with him -- James Dean, Eli Wallach, Paul Newman, Montgomery Clift, Maureen Stapleton, Robert De Niro, Steve McQueen, Jane Fonda, and Al Pacino.

Those biographers and former associates who accuse Strasberg of using the Method to cast a spell on his famous pupil have no understanding of Marilyn's longtime inclination in that direction, and they underestimate her dedication to her career.

Aside from training her in the Method, Lee and Paula Strasberg gave Marilyn some much-needed confidence that helped her to believe in herself. The couple had faith in Marilyn's abilities and encouraged her goals. "For the first time," Marilyn stated, "I felt accepted not as a freak, but as myself."

Eventually, Marilyn dismissed her longtime acting coach Natasha Lytess in favor of Paula Strasberg. Friends and acquaintances have often commented on Marilyn's tendency to cast aside trusted friends and old companions when she felt the forward momentum of her life carrying her beyond them.

Lytess was bitter about Marilyn's decision, particularly because her foremost pupil arranged for the bad news to be relayed to her by an East Coast law firm. Marilyn was not hardened enough to perform the task herself.

In an interview, Lytess claimed that Marilyn wouldn't even ask Twentieth Century-Fox to retain her services as a coach for other actors, though Fox may have wanted to get rid of her for their own reasons. Lytess died in 1964, just two years after Marilyn.

While Marilyn was living in New York, she was encouraged by the Strasbergs to enter analysis. Lee Strasberg believed analysis gave an actor an improved comprehension of his or her motivations and emotions. But Strasberg did not realize that Marilyn was involved in an inner struggle that analysis and the Method would never solve.

Though experiencing one of the peak periods of her life and career, Marilyn was plagued by insomnia to such a degree that a bottle of Seconal was always in reach. More significantly, she was apparently unable to reconcile her image as sex goddess "Marilyn Monroe" with her own identity; she regarded "Marilyn Monroe" and her true self as two different entities.

Actor Eli Wallach has remarked how she could walk through the streets of New York City and not be noticed and then, in a moment's time, make some inner adjustment to transform herself into the beautiful, breathy, and sensual movie star that everyone recognized. Heads turned, traffic stopped, and fans came running. "I just felt like being Marilyn for a moment," she would say.

Learn how Marilyn finally achieves the contract she deserves from Fox in the next section.