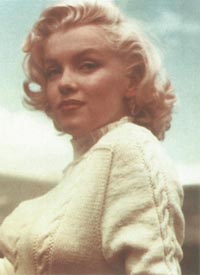 Marilyn would continue to battle the emphasis put on her sexuality versus her abilities as an actress.

Although the critics remained divided about Marilyn, the public had long since made up its mind that Marilyn Monroe was a bona fide star. She received a number of awards shortly after the production of Gentlemen Prefer Blondes that not only signified her popularity with the public but also put her in the spotlight in more ways than one.

In the spring of 1953, Redbook, a woman's magazine that had been generally favorable to Marilyn, honored her with its Best Young Box Office Personality award. She had also won Look magazine's award for Most Promising Female Newcomer of 1952.

However, these tributes to her stardom were totally eclipsed by the circumstances surrounding an award given Marilyn by Photoplay movie magazine in March 1953. Photoplay dubbed Marilyn the "Fastest Rising Star of 1952" and presented her with a plaque during a prestigious awards ceremony.

For the occasion, Marilyn wore one of the dresses designed by Billy Travilla for Gentlemen Prefer Blondes. The form-fitting gold lamé gown was so tight that Marilyn had to be sewn into it.

As she walked away from the podium after receiving her award, the audience hooted and screamed at the sight of her voluptuous body swaying across the stage. Some accounts of the evening's events report that comedian Jerry Lewis leaped up on his table and whistled wildly.

Surprisingly, the press seemed more aghast at Marilyn's presumptuousness for wearing such a costume than they were at the audience's uncivilized behavior.

Time magazine called for Hollywood to "go easier on the sex angle" after reporting on the affair, while former glamour queen Joan Crawford lambasted Marilyn in Bob Thomas's syndicated column.

Crawford told Thomas that the sight of Marilyn caused "those of us in the industry" to shudder (as though Marilyn was somehow not in the industry) and went on to say, "She should be told that the public likes provocative female personalities; but it also likes to know that underneath it all, the actresses are ladies."

Marilyn was tremendously hurt by Crawford's haughty comments and used her ally in the press, Louella Parsons, to fight back.

Parsons quoted Marilyn as saying: ". . . Why should [Crawford] select me to blast? She is a great star. I'm just starting. And then, when the first hurt began to die down, I told myself she must have spoken to Mr. Thomas impulsively, without thinking ... "

The publicity surrounding Marilyn was once again focused on her sexuality at the expense of her identity as a person and as an actress. Though her films revolved to a large extent around that sexuality, her movie roles represented a much more complex use of the sexual aspect of her image.

Her publicity and studio promotion tended to extract her sexuality and emphasize it, resulting in condescending remarks by critics about her acting abilities, criticisms of her behavior by women's groups, and snickering comments by the press about her figure.

Both Marilyn and companion Joe DiMaggio grew increasingly upset at the inability of the press and public to separate her highly artificial image from her off-screen life.

During this period of Marilyn's rapidly rising stardom, it is easy to trace her life and career through a series of major publicity events. The negative reaction to the Photoplay ceremony in the spring of 1953 soon gave way to more positive publicity surrounding the imprinting of her handprints and footprints in the forecourt of Grauman's Chinese Theater in June of that same year.

Thanks to the box-office success of Gentlemen Prefer Blondes, Marilyn and Jane Russell were asked to appear together to place their prints and signatures in the cement. A hallowed tradition in Hollywood, the honor offered visual proof of an actor's stardom.

In her tongue-in-cheek manner, Marilyn suggested that if these prints were supposed to signify a performer's screen image, then Russell should lean forward so her bust would be imprinted in the cement while she should simply sit in it!

She also suggested that a diamond chip be used to dot the "i" in Marilyn, but officials used a rhinestone instead. Predictably, a star-struck thief soon pried the stone from its place.

To learn about Marilyn's continued career in the movies and her marriages to Joe DiMaggio and Arthur Miller, read Marilyn Monroe's Later Career.