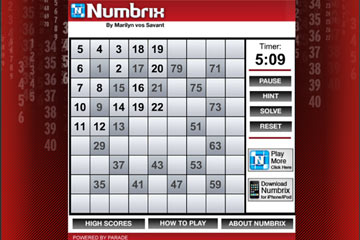 To play Numbrix, you must fill in all of the blanks with consecutive numbers between one and 81. The only rule is that the numbers must be along the vertical and horizontal axis, not the diagonal.
Image courtesy of Parade magazine

Ira Bornstein figured he would never have to search for another puzzle to entertain and engage his mind. For years, Bornstein, who is chief operating officer at Florida-based American Bancard LLC, a company that provides merchants with credit and debit card processing services, was a devotee of the wildly popular game, Sudoku. But then in 2008, Bornstein was flipping through the pages of Parade magazine and came across its weekly numbers and logic puzzler called Numbrix [source: Bornstein].

Ever since, Bornstein has been so hooked on Numbrix that "my wife tells me I'm nuts all the time," he says. For Bornstein, the reasons Numbrix is fun, challenging and extremely satisfying are many. For one thing, Bornstein equates playing the puzzle to being in a maze -- in a good way. "As long as the path I choose always has a way in and a way out, I can keep moving," he says.

Interestingly, Bornstein also is attracted to Numbrix because each puzzle is unique and each provides him with the sort of sense of accomplishment that can be elusive in the day-to-day activities of his job. "In a business setting, there are ongoing issues to resolve and many never come to 100 percent resolution," he says. "In Numbrix, the challenge is front and center and whether it's a success, or the rare instance the puzzle wins, it's complete in less than 10 minutes."

Click ahead to find out how and where to play Numbrix.

It was no coincidence that Bornstein came across Numbrix in Parade magazine. The puzzle was developed by Marilyn vos Savant, who writes the magazine's "Ask Marilyn" column and it first appeared in her column in 2008; today, Numbrix also is available on the magazine's Web site and as an app for iPhones and iPads [source: Parade]. Regardless of whether players find the puzzle online or in print, the rules are the same and quite straightforward.

At first glance, Numbrix looks a bit like a crossword puzzle: The playing space is a nine-by-nine grid with mostly empty spaces that need to be filled in. But that is where the similarities with crossword puzzles end. There are no cleverly worded clues, but rather a handful of numbers between one and 81 already in place in the grid.

Very simply, it's the task of players to fill in all the blanks so that there is a continuous chain of numbers between one and 81 [source: vos Savant]. The only rule is that numbers inserted must be along the vertical and horizontal axis, not diagonal. Another way to think of it is that you've won the game if you are able to take a pen and trace a vertical and horizontal path from one to 81 without ever lifting your pen off the paper. The online version of the game has a "hint" button that fills in a number to provide a clue, but otherwise memory and logic are your only tools.

Keep reading to learn more about the big brain behind Numbrix.

The Genius Creator of Numbrix 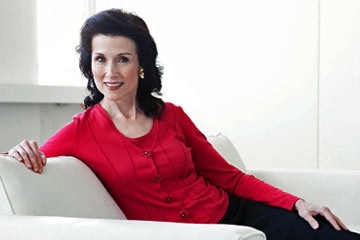 Numbrix is the creation of Marilyn vos Savant who, aside from being the weekly author of Parade's "Ask Marilyn" column, happens to have the world's highest recorded IQ.
Image courtesy of Jim Bastardo

Numbrix creator Marilyn vos Savant just so happens to have recorded the highest IQ in the world -- an achievement that helped lead to her gig at the magazine. In the 1950s, at the tender age of 10, the St. Louis-born vos Savant correctly answered every question on the adult Stanford-Binet IQ test, which translated into an astoundingly high IQ of 228. It wasn't until much later -- 1985, in fact -- that she was recognized by Guinness World Records for having the highest recorded IQ, a category Guinness eventually removed because of worries that intelligence tests were too disparate to allow for just one record holder [source: Knight].

For more than two decades now, in her "Ask Marilyn" column, vos Savant has answered questions of almost every type imaginable from readers, including whether people who live at high elevations sunburn easily because they're closer to the sun and the far more loaded question of whether men are smarter than women [source: Parade].

In the early 1990s, vos Savant and her column received a flood of attention because of her answer to the so-called "Monty Hall Dilemma," in which a reader painted the scenario about being on a game show where contestants would have the choice to open one of three doors, with only one door hiding a prize behind it. The reply vos Savant gave created uproar amongst many Ph.D. mathematicians: Rather than saying each door had a one in three chance of concealing a prize, she instead said the host's prompting about which door to open influenced the outcome. As many humbled mathematicians who had written her angry letters would later realize, vos Savant was right [source: Knight].

According to vos Savant, she created Numbrix partly for her readers and partly for herself. "I developed the puzzle to offer readers an enjoyable diversion that would exercise their fluid intelligence (meaning: logic plus memory) at the same time," she says. "But the real fun for me was constructing every puzzle by hand -- no real Numbrix puzzles are generated by a computer -- and proofing it the same way to create puzzles that had unique solutions."

Read on to learn some tips on solving Numbrix and how it's more than just a game.

Tips for Solving Numbrix and Benefits of Playing

It shouldn't be a big surprise that a game invented by a certifiable genius doesn't have a bunch of gimmicks and tricks that allow players to quickly solve it. As vos Savant points out, anyone playing Numbrix online who decides to use the "hint" button is missing an opportunity to exercise their mind. She says that the best way to approach the game is to take your time, never guess, and use only logic and memory. "Pretend you're completing the puzzle in ink," she says. "This practice will exercise fluid intelligence because you'll need to keep several factors in mind at the same time."

Even though vos Savant urges players to eschew the "hint" button, she does provide one suggestion about how to best approach a new Numbrix puzzle. "The easiest way is to scan from the lowest number to the highest one and fill in any missing numbers where the placement is certain. Repeat this again and again, though the missing numbers will become less and less apparent," she says.

For Ira Bornstein, it's just as well that vos Savant doesn't have any hints about how to solve Numbrix -- he considers himself a puzzle purist and only gets satisfaction out of solving them all on his own. Besides, Bornstein believes that playing Numbrix helps him in his job as a chief operating officer and those benefits would likely be lost with quick and easy tips for solving the puzzle.

"Interestingly, at work it has helped me think non-sequentially," he says, in reference to his approach to solving Numbrix, which is to fill in chunks of the grid he can figure out easily at the start and then move to the harder areas. "It's a reminder that even if the results of a project end up in a sequence, a project can be worked in sections without forethought of how those sections will be connected seamlessly."