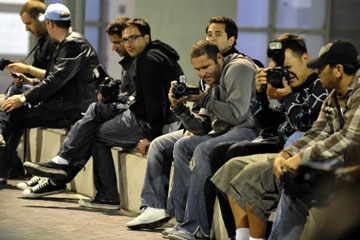 Paparazzi wait around for Lindsay Lohan to be released from the Lynwood Correctional Facility.
Toby Canham/Getty Images

At the most basic level, paparazzi hang out on the streets and in public places waiting for an opportunity to photograph a star. In public, the paparazzi can snap away unhindered by laws. But for a paparazzo who wants to make the big bucks, this method is far too inefficient; he must make sure he’s in the right place at the right time to get the shot.

Decades ago on Rome's Via Veneto, the birthplace of the paparazzi cultural phenomenon, amateur Italian photographers loitered around celebrity haunts and hangouts waiting for the action to happen. Although the paparazzi industry has changed dramatically since then, it still involves a lot of waiting around, like a hunter in a deer stand, his rifle at the ready [source: Samuels]. By watching, waiting and possibly paying off valet attendants, shop clerks, restaurant hosts and others, paparazzi can gradually learn about a celebrity’s habits and anticipate their activities. This paparazzi lifestyle has also evolved into its own minor tourist attraction. For a fee, Los Angeles visitors can fulfill their celebrity obsession and go hunting for Brad, Jen, Britney and whomever else is out and about that day with a bona fide "pap" [source: Yancey].

The influence of the Internet has also affected how paparazzi hunt down their prey. Ironically, as the celebrity photography industry has grown more voracious, a symbiotic relationship has also developed among agents and public relations managers and the paps. Up-and-coming performers or personalities might directly engage with paparazzi, goading them to snap pictures that could get into tabloids and blogs. In paparazzi parlance, people willfully setting up supposedly candid shots is called “giving it up” [source: Samuels].

But often with the paparazzi, the tactics for getting paid are far more about taking than giving.

Actress Sienna Miller has brought successful lawsuits against paparazzi photo agencies and media outlets that have published her image alongside inflammatory headlines and captions. Fed up with harassment by hoards of photographers, Miller initially received $23,000 in damages from British tabloid “The Sun” in 2008 [source: Hirsch]. She also won a restraining order against British photo agency Big Pictures following charges of invasion of privacy and harassment [source: The Independent].