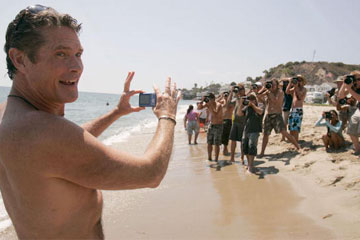 So, if we are to understand that the law upholds our right to be "free from unwarranted public scrutiny or exposure," then it would seem paparazzi aren’t allowed to do what they do. In fact, privacy rights, as established and upheld by the U.S. Supreme Court, were based on the recognition that journalism and news gathering inherently intrude on people’s personal lives from time to time [source: Nordhaus]. And certainly, paparazzi such as Ron Galella, whose stalking provoked Jacqueline Kennedy Onassis to seek out a restraining order against him, violate those privacy provisions laid out in the law. And in more recent years, celebrities including Sienna Miller, Hugh Grant and Lily Allen have fought back against the paparazzi system in court to defend their basic human rights to live their lives without excessive intrusion from a mob of camera-wielding strangers.

However, such intrusion often is permissible when it’s in the public interest, or when someone -- i.e. a celebrity -- pursues a profession that thrusts him or her into the limelight as part of the gig. In other words, there’s a loophole in privacy laws when it comes to people legally defined as public figures.