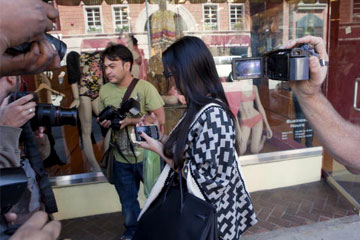 Participating in the paparazzi safari has long been a game of speed: pouncing on the celebrity before anyone else does and getting the right photo at the right time. Technology has only amplified the importance of time and precision in the paparazzi industry. High-resolution camera phones have also enabled anyone, whether employed by a photo agency or not, to instantly become a short-term shooter. As the field has opened, the value of the paparazzi product has been simultaneously downgraded.

In the early days, celebrity outings and arrivals would certainly attract a swarm of paparazzi, cameras at the ready. But the entire process, from snapping an exposure to getting a photograph printed in a tabloid, was much slower. Even flash capabilities were limited. Photographers would have to change out or recharge flash bulbs, possibly wasting precious minutes in the process. Film photography had to be processed, too, further delaying the photo's delivery to the public. Now, the paparazzi industry is entirely digital, which means that shooters can instantly uploaded their frames to an agency server or e-mail them out to potential buyers.

Paparazzi cameras don’t necessarily differ from those of other professional photographers and videographers, except they might need to be more adept at swapping equipment to shoot at various ranges, like a golfer easily switching from a driver to a putter. For instance, when he took the iconic photograph of Britney Spears shaving her head, Los Angeles paparazzo Luiz Betat couldn’t fit his longer-range 70-200 millimeter camera through the hair salon’s tiny back door opening. Instead, he switched it out for a shorter 24-70 millimeter camera, stealthily going unnoticed by the pop star, as he captured the shocking moment [source: Samuels].

But just because paparazzi are armed and ready to shoot celebrities at will doesn’t mean the stars have to acquiesce. Indeed, the higher up the A-list ladder one climbs, the more elaborate the paparazzi-dodging likely becomes.