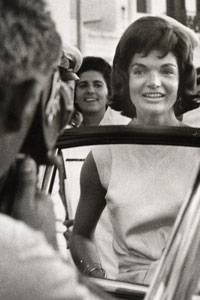 Ron Galella, one of the most famous (or infamous) figures in paparazzi history, went to extreme lengths to stalk his favorite celebrities. Although his candid shots of Elizabeth Taylor, Marlon Brando, Barbara Streisand and other A-listers have earned him a small fortune during his 50-year career that started in the 1950s, the now-septuagenarian didn’t exactly earn his subjects’ respect along the way. Galella is best known for following Jacqueline Kennedy Onassis from New York to the Greek Isles for years, a situation that culminated in a 1973 restraining order banning him from coming within 125 feet (38 meters) of the former first lady [source: Telegraph]. After that, Galella still would don disguises, hideaway in trees and taxis and even violate his restraining order in order get another image of Jackie O. In other words, he set the standard for the modern-day paparazzi feeding frenzy.

Whether today’s paparazzi are familiar with Galella or not, they abide by the same professional principle: Get a shot by any means necessary. The individual paparazzo is only limited by his or her resources, craftiness and nerve. Industry competition leaves little room for excuses, however, which is why the celebrity photographers tread a fine line between the public and private, getting as close -- and sometimes dangerously close -- as they can to their targets.

Although celebrities are public figures, which legally allows paparazzi to snap their photos on the street and sell them for exorbitant sums without prior approval, the rules change when it comes to private property. Paparazzi must respect property laws barring them from camping outside bedroom windows or barging into restaurants and taking a table next to Brad Pitt and Angelina Jolie. Instead, they often wait outdoors until their targets inevitably make an exit, which, some argue, is just as intrusive. For instance, late singer Amy Winehouse won a court-ordered injunction against paparazzi “door-stepping,” or camping outside her home, in 2009. Afterward, Brit photographers couldn’t legally get within 330 feet (100 meters) of her suburban stoop [source: Dowell and Robinson].

Once in public, however, paparazzi are far freer to surround celebrities, swarming around their cars or cabs like gnats. Roving bands of paparazzi consisting of drivers, photographers and spotters (who keep an eye out for the famous) may descend upon stars, forming a triangle around targets to ensure that someone gets a clear frame no matter what [source: Samuels]. These aggressive tactics have rebranded today’s paparazzi as the “stalkerazzi.”

Why the frantic celebrity chase? For the promise of a hefty payday, of course.