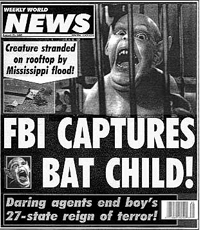 Tabloids cover everything from celebrity scandals to the outrageously bizarre.
2008 HowStuffWorks

Even if you've never read a tabloid, the headlines probably grab your attention at the supermar­ket checkout. From celebrity scandals to the truly bizarre, tabloid newspapers seem to cover stories that are outside the realm of serious journalism. Sometimes it seems like the stories are completely made up. And where do they get photographs of two-headed babies and space aliens, anyway?

In a highly regarded newspaper like the New York Times or Washington Post, the facts in a news story are meticulously checked and confirmed with multiple sources (when everything goes as it should). Editors and writers conform to journalistic standards and work hard to maintain an overall sense of objectivity. Tabloids don't seem to follow any of these rules. So where do they get their stories from?

Sometimes tabloids do make up their stories out of thin air. The notorious sex and gore tabloids of the 1950s and 60s were almost completely fictional, with just enough truth to make the stories seem believable. Even today, some tabloids include "top-of-the-head" stories invented by writers. If a story is about an incredible event that happened in some remote part of the world, or the people quoted in the story are vaguely identified, then it is probably false. This is a last resort for tabloid writers and editors, however -- they usually try to base their stories on a grain of truth.

In this article, we'll find out where tabloids get their stories, how they evolved and what effect the popularity of tabloids has had on newspapers and television shows.

They Control Everything You Read!

The most important recent development in tabloid history is the 1999 purchase of every major supermarket tabloid in the U.S. by American Media, Inc. The National Enquirer, Star, Globe, National Examiner, Weekly World News and others are all owned by this media conglomerate.