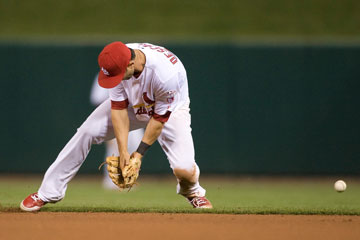 Daniel Descalso of the St. Louis Cardinals makes an error on a ground ball in the eighth inning in a game against the Cincinnati Reds. See more sports pictures.
Jeff Curry/Getty Images

You don't need to know what an error is to know that it isn't good. After all, it's an error! Philadelphia shortstop Billy Shindle had 122 of them in 1890, the most earned by a big league player in one season [source: Vass]. So what did Shindle do that was so bad?

Simply put, an error is a mistake by a fielder that helps the opposing team; it could allow a batter to stay at bat longer, prolong the time a runner is on base, or cause a runner to advance one or more bases. While this seems like a pretty straightforward definition, it's complicated by the fact that there are literally dozens of ways to make an error. The task of assigning errors falls with the official scorer, who's also responsible for keeping track of hits, strikeouts, walks and other statistics.

Most errors occur when players are performing three basic actions: fielding, throwing and trying to tag a runner out. Fielding errors occur when a batter hits a grounder, line drive, or pop up to a player who mishandles the ball by bobbling it or dropping it altogether. This could happen when an outfielder drops a fly ball, or an infielder lets a grounder get by or just fails to stop it cleanly. However, a scorer will only give an error to a fielder if the play could have been made with "ordinary effort," meaning that a player of average skill could have caught or fielded the ball given the field and weather conditions.

A common throwing error occurs when a fielder tosses a ball out of a teammate's reach, allowing a runner to advance one or more bases. Picture a shortstop who fields a grounder and, in an effort to get the batter out, throws the ball over head of the first baseman. This mistake is called a wild throw, and results in an error for the shortstop. Players can also be charged with errors if a throw takes an unnatural bounce on the ground, hits a base, or strikes a runner or umpire, even if it seems unfair to the fielder.

Errors can also happen when a fielder is supposed to tag a runner or a base and fails to do so, allowing the runner to advance. For example, if a third basemen fields a grounder, throws it to first for the out, and the first baseman fails to tag the base, the runner is safe and the scorer charges the first baseman with an error. The play would also result in an error for the first baseman if he or she dropped the ball.

Players can make errors at any level: major league, college, high school, and even Little League (though coaches don't usually keep such statistics for young kids). They don't necessarily affect the score of the game, but as you might expect, such mistakes often result in runs that would not have been scored otherwise. Errors are also a central part of a player's fielding statistics. Too many of these miscues may cause a fielder to lose his starting position on the team, but a low number of errors could lead to a special recognition or award, like the Gold Glove Award for defensive excellence in the major leagues.

I've always known what an error is, but what impressed me when writing this article is how many different ways you can commit one. Bobbling a grounder, dropping a pop fly, overthrowing the first baseman -- even rolling the ball to the pitcher's mound when you think there are three outs and there are only two. Then, as if the embarrassment of making such mistakes in front of a crowd isn't enough, the name "error" only serves to reinforce the fact that you really messed up. It's a good thing I didn't think like this when I played Little League or I would have spent a lot less time having fun and a lot more time crying.

Who Pays if You Get Smacked by a Foul Ball?
10 Must-see Fields to Visit Before You Die
How Minor League Baseball Teams Work