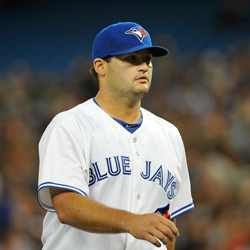 Many baseball players, like Chad Beck, who was recently sent back to the minors in July 2012, go back and forth between the majors and the minors. See more sports pictures.
Brad White/Sport/Getty Images

Although I consider myself a big baseball fan, for some reason I never got into the details of the minor leagues until now. I just knew the basics. Most players who sign with a team don't start out playing in the majors. Typically, they begin their professional baseball careers as part of a "farm team" -- a minor league team -- where they hone their skills and wait until they get called up. Most of the teams are affiliated with a major league team, but there are also independent leagues whose players get scouted by major league teams too. These days, there are five different classifications: rookie, class-A short season, class A (including single-A and A-advanced), class AA and class AAA.

Where a player begins in the system, and how long he spends there, depends on his skill level and performance. It's not uncommon to start out in a lower level and quickly move up or to skip back and forth. Many players never make it out of the minors, but if they do, they aren't guaranteed to stay there. Major league teams can only have 40 players on their rosters at any given time, with 25 of those considered "active." The rest are either in the minors or on the disabled list. A player might be called up to the majors to replace an injured major leaguer and find himself taking over the position permanently. Or he could spend a few weeks there and be sent back. This can't go on forever, though; there are rules about how many times a player can be sent down before another team can claim him or he can become a free agent and go to another team.