How does a perfect game in baseball work? 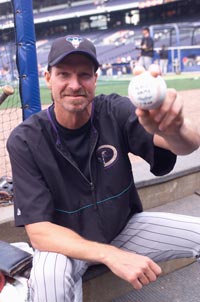 The right person to ask about perfect games is a pitcher. Here is the pitcher's view of perfection: A perfect game occurs when a pitcher faces 27 batters and none of them get on base. They all strike out, fly out or are tagged out while getting to first base.

Sixteen major league perfect games have been pitched in the entire history of baseball:

This makes a perfect game one of the rarest events in sports!

The pitcher I spoke to also mentioned these other forms of perfection:

How many ways can a batter reach first base?
10 Legendary Baseball Curses
How does a batter warm up?