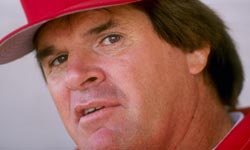 Former Cincinnati Reds player/manager Pete Rose appeared to be heading for the Baseball Hall of Fame before gambling, prison and a lifetime ban from baseball got in the way. Where does his scandal appear on our list? See more sports pictures.
Allen Steele/Getty Images

There's a lot to love about baseball. It's a sport that provides a complete sensory experience -- whether it's the smell of a new leather glove, the sound of the crack of a bat or the indelible image of a well-hit ball clearing the left-field wall to win the game. But in the rich history of the game, there's also plenty of intriguing mischief. Picking just five episodes from the sordid list of controversial baseball headlines over the years is a challenge akin to hitting a fastball in Game 7 of the World Series.

These five include episodes involving illicit sex, drugs, ill-advised comments and behavior that would prompt any umpire to yell, "You're outta here!" They're stories that grabbed headlines in their era for all the wrong reasons.

First up, is the true story of some sullied Sox and the stink that threatened the game itself.

The 1919 Chicago White Sox were a talented team that was the odds-on favorite to win the World Series. But the odds didn't take into account what was going on behind the scenes. Many of the players were grossly underpaid and didn't trust owner Charles Comiskey, who repeatedly failed to deliver on bonuses and promises of increased compensation [source: Chicago Historical Society].

When a gambler agreed to pay a total of $100,000 to Sox players willing to hand the series to the rival Cincinnati Reds, the deal -- some players felt -- was too good to turn down. In a back-and-forth series that tested the mixed feelings of Sox players, the Reds ultimately won the championship. Eight members of the Sox were eventually acquitted by a grand jury of throwing the series when vital pieces of evidence disappeared.

In 1920, in an effort to save baseball from the public relations nightmare, a federal judge was named the sport's first commissioner. Kenesaw Mountain Landis didn't care about the grand jury's verdict. He banned the eight accused "Black Sox" from Major League Baseball for life [source: Chicago Historical Society].

When Sports Illustrated named its Sportsman of the Year in 1998, two men who had captured the nation's attention received the award -- Mark McGwire and Sammy Sosa. Both hulking power hitters had surpassed Roger Maris' single-season home run record that had stood for 37 years; McGwire with the St. Louis Cardinals and Sosa for the Chicago Cubs. Only three years later, the increasingly bulky San Francisco Giants slugger, Barry Bonds, surpassed both men's accomplishment when he hit 73 balls out of the park in an awe-inspiring season [source: ESPN].

The high-octane offense that Major League clubs were delivering, beginning in the late 1990s, made for great sports theater. But as allegations and revelations of performance-enhancing drug use began to surface, the public began to realize it was just that -- theater, fiction, cheating. The record books had been rewritten, but also tainted. The league began a crackdown on drug use and sportswriters and fans are doubtful that names like McGwire, Sosa and Bonds will ever be included in the game's Hall of Fame [source: ESPN].

From 1998 to 2009 a total of 10 Major Leaguers added their names to the short and prestigious list of players to hit at least 500 homers in their careers. Six of the 10 would be tied to performance enhancing drug use [source: ESPN].

Eleven cents -- that was what Pete Rose was earning each day in the summer of 1990 as he began a prison term in Illinois. It was the culmination of a riches-to-rags story that still provokes debate [source: USA Today].

Following a Hall-of-Fame-worthy career on the field, rumors began to circulate that the Cincinnati Reds manager was gambling on baseball. A Major League investigation uncovered that Rose had even bet on his own team, although never for them to lose. Disgraced, Rose was permanently banned from the sport and pleaded guilty to concealing his income, resulting in his stay behind bars. Still, it wasn't until 2004 that he publicly admitted he'd placed wagers on the sport he loved. As of 2012, his applications for reinstatement to Major League Baseball have been denied [source: USA Today].

Trades are routine in baseball, but a trade that occurred leading up to the 1973 Major League season was unusual for a couple of reasons: The trade only involved one team, and the focus was two players' wives.

New York Yankees pitchers Fritz Peterson and Mike Kekich were intrigued by the idea of swapping wives. The running joke between friends turned into reality when Peterson's wife and children moved in with Kekich and vice versa. It was intended to be a long-term deal -- and for Peterson and Susanne Kekich, it was. They're still married. The fit for Mike Kekich and Marilyn Peterson was more predictable. Their less-than-storybook tale quickly ended quickly with a split [source: Westmoreland].

In 2011, Oscar winning friends Matt Damon and Ben Affleck began work on a plan to bring the Peterson/Kekich tale to the silver screen. "The Trade" would be written by Affleck and younger brother and fellow actor, Casey Affleck [source: Westmoreland].

On paper it looked like Marge Schott's story would be good for the sport. The wealthy widow who gave generously to charities throughout the Cincinnati area would become only the second woman in baseball to control a Major League team -- the Cincinnati Reds. But what came out of Schott's mouth during her tumultuous reign from 1984-99 was the problem. The brash, smoking leader repeatedly used racial slurs and ultimately drew the wrath of baseball for making complimentary remarks about, of all people, Hitler. She wasn't allowed to operate the team on a day-to-day basis and eventually sold a majority interest in the Reds for $67 million. When she died in 2004, Fay Vincent -- the former commissioner of Major League Baseball -- described her as "a tragic figure" [source: Goldstein].