In baseball, how does a pitcher throw a curveball? 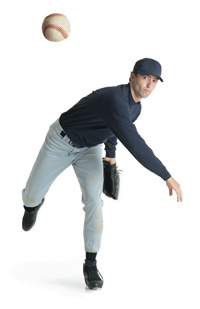 The secret behind the curveball is the spinning action created when the pitcher releases the ball.
Photodisc/Getty Images

A successful major league batter gets a hit only 30 percent of the time he comes to bat. One of the ways pitchers lower these chances even further is by throwing a curveball. A curveball is a pitch that appears to be moving straight toward home plate but that is actually moving down and to the right or left by several inches. Obviously, a pitch that curves is going to be harder to hit than a fastball that is moving straight.

There are two basic factors involved in creating a curveball:

Any baseball pitch begins with how the pitcher grips the ball. To throw a curveball, a pitcher must hold the baseball between his thumb and his index and middle fingers, with the middle finger resting on the baseball seam. When the pitcher comes through his motion to throw the ball, he snaps his wrist downward as he releases the ball, which gives the ball topspin. If the pitcher throws properly, the back of the his hand will be facing the batter at the end of the motion. The ball will break down and away from a right-handed batter if thrown by a right-handed pitcher.

Adding to the air pressure exerted on the ball are the 108 red stitches that hold the cover on the ball. Because they are raised, the stitches increase the amount of friction created as the air passes around the ball and places more air pressure on top of the ball. A well thrown curveball can move as much as 17 inches either way. If you've ever seen a batter jump out of the way of a baseball that ends up crossing over the plate, you've seen a good curveball.