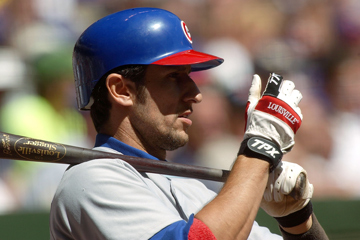 From players who swing weighted bats on deck to Hall of Fame third baseman Wade Boggs, who scrawled the Hebrew symbol חַי (chai, Hebrew for "life") in the dust during his at-bats, batter warm-up rituals exist to psych players up both physically and psychologically.

Former Major Leaguer Nomar Garciaparra's helmet-touching, armband-adjusting, glove-pulling and cleat-grinding routine was so elaborate that fans fondly wondered if he had obsessive compulsive disorder. Then there were Jorge Posada and Moises Alou, who actually urinated on their own hands to improve their batting grips.

Countless other players seem to put stock in a more physical warm-up ritual. From Little League on up, many players are taught that swinging a heavier bat on deck will help you hit harder in the batter's box. It's common to see ball players at all levels swinging heavy bats, sledgehammers or bats weighted down with clay sleeves and donut rings in the batter's circle.

Recent science cries foul on the bat donut and other weighted warm-up gear, however. In 2009, researcher and physical education professor Coop DeRenne published a review of scholarship on the effect of weighted implements in batter training. Of the five studies he reviewed, four showed that warming up with weighted donut rings actually produced slower bat velocities. DeRenne's overall conclusion was that players should warm up with bats weighing no more or less than 12 percent of standard weight bats [source: DeRenne and Szymanski].

So, if swinging weighted bats won't help, how does a batter warm up? In an interview with The Wall Street Journal, Yankees outfielder Nick Swisher says, "Each guy does what's right for him. How you feel matters most" [source: Wolff].

I interviewed two former college softball players, Lindalisa Severo (Binghamton University) and Courtney Kovanis (Purdue University), who both agreed that psyching up is at least as important as physically warming up. "Every batter is different," says Kovanis. "I used to spit at the pitcher!" Severo agrees, adding, "A big part of my warm-up involved trying to psych out the pitcher. I'd hold the bat behind my neck and stare her down the whole time I was on deck. You have to exude confidence. You have to have swagger."

Batter warm-ups are equal parts superstition and psych-out, with a dash of physical loosening up thrown in for good measure.