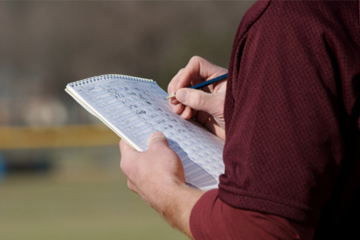 A baseball scorecard lets you record every detail of the action on the field.
iStockphoto/Thinkstock

Baseball has long been called the great American pastime, but it can be tricky for newcomers to figure out.

Most people understand the old "one, two, three strikes you're out," but baseball has many intricacies, positions and strategies that can make it tough to follow if you're inexperienced at watching the game.

A great way to learn things a little better is to keep a baseball scorecard. Essentially, a scorecard allows someone watching the game to record every play and every move that happens throughout the innings.

Keeping a scorecard is useful for a variety of baseball watchers. The official scorekeeper uses a scorecard or similar system to determine the actual score and end result of a game. Talent scouts can also use them to locate promising players. In addition, dedicated fans can keep a scorecard throughout the game and then start a collection. Keeping score like this even works in kid's Little League games.

Perhaps most importantly, scorekeeping -- whether it's done on paper on a computer -- is used to determine important statistics like a player's batting average, earned run average (ERA) and strikeout ratio [source: McGovern].

If you decide to start keeping score in baseball, it's a great way to learn more about the sport and get even more involved than simply watching the game. In this article, we'll show you the ins-and-outs of keeping score on a scorecard -- what the symbols mean, how to use shorthand and how to score a game as you go along. Play ball! 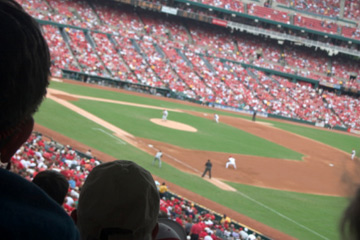 How to Keep Score in Baseball 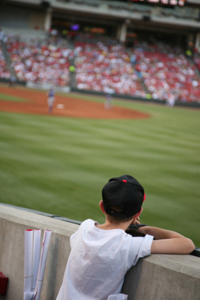 If you understand the basics of keeping a baseball scorecard, as a fan, you can be even more involved in baseball than you ever were before.
iStockphoto/Thinkstock

Now that you know some of the basic terms and numbers used for filling in a scorecard, let's take a look at the card itself. You can download a basic scorecard off the Internet, buy them in books or even purchase them at the ballgame for a few dollars. You'll also need a card and a pencil -- it's best not to use a pen in case you need to correct yourself.

The cards usually have spaces for the name and date of the game, the roster of batters and pitchers (which you'll need to fill in for yourself) and a series of cells with diamonds representing the field -- one per inning. Within those boxes are two smaller rows of cells, where you mark the ball count and strikes [source: Swingley].

As the plays happen, mark them on your card. Let's say the left fielder is first up to bat in the first inning. He gets a single in his first at-bat, so you mark a single line on the first diamond next to his name, indicating he got to first base.

When another batter comes up, let's say he hits the ball and it's fielded by the shortstop, who throws the ball to first base and the batter is out. You'd mark 6-3 on your card -- caught by 6 (the shortstop), thrown to 3 (the first baseman).

The next batter strikes out completely. You'd mark a K on his square for that inning. Now, in our imaginary game, let's say we have one man on second base and one out. The next player comes up to bat -- let's imagine he hits a homerun. You'd mark an HR on your card. At the end of each inning, you'll total the hits and runs for that inning only. You'll add that all together at the game's end to get the final score [source: MLB.com].

Remember, all scorecards aren't necessarily going to be uniform in appearance. You can search for a design you like or you can simply depend on what you get at the ballpark. Many people have created their own custom scorecards and now there are even scorecard apps for the iPhone and Android handsets [source: Apptism.com]. The good news is that the basic use of numbers and symbols is fairly uniform throughout the sport.

Now that you're familiar with the fundamentals of keeping a baseball scorecard, with just a little practice, you can use this skill to get even more involved in baseball than you ever were before.

For more information about baseball, scorecards and other related topics, follow the links on the next page.