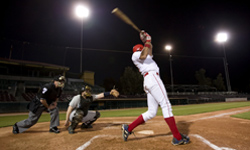 Although baseball feels like an American institution, it's much more of an American evolution. The story of Abner Doubleday "inventing" the game in 1839 by drawing a diamond in the dirt at Cooperstown, New York is itself an invention [source: Miklich]. The game of "base ball" had been played for nearly a century by the time of Doubleday's purported inspiration. The truth is that baseball wasn't invented by anyone, but evolved from existing sports and was codified over the centuries into a series of official rules.

One of the earliest mentions of "base ball" is found in the diary of Englishman William Bray, born in 1736 [source: MLB.com]. In an entry dated March 31, 1755, Bray writes, "Went to Stoke church this morn. After dinner, went to Miss Jeale's to play at base ball with her the 3 Miss Whiteheads, Miss Billinghurst, Miss Molly Flutter, Mr. Chandler, Mr. Ford and H. Parsons. Drank tea and stayed til 8."

The early game almost certainly evolved from rounders, a popular British ball-and-stick sport that is still enjoyed by English school girls. Rounders closely resembles baseball, but differs in the details. Like baseball, there are nine players to a side, but rounders uses upright sticks for bases, the pitcher throws underhand, the batter swings with one hand, and matches last five to seven innings [source: MLB.com]. Still, the evolution from rounders to baseball is a straight line.

In the late 18th century, baseball took root in America. Folks in New York, Pennsylvania and Massachusetts each played their own regional variation of the game. In Massachusetts, for example, every hit was fair and runners didn't have to stick to a straight path between bases, making for some fun outfield run-downs. A variation on the more sober New York game eventually won out and its rules were codified at the First Base Ball Convention, held in New York in 1858.

Still, the game that was played in the 1850s would be almost unrecognizable to modern baseball fans. In this article, we'll cover the 5 major rule changes that have shaped the evolution of America's favorite pastime.