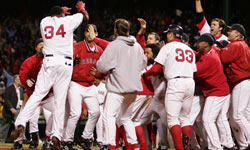 Upsets are part of what makes baseball interesting. They remind us that any team -- no matter where they're from and how small the payroll -- can beat any other team on any given day. All sports have upsets, but baseball history is filled with some of the most dramatic upsets of all.

Part of the reason for that is baseball is such a game of numbers and statistics. We have precise metrics (batting average, earned run average, slugging percentage, etc.) that describe exactly why the good teams are good and the bad teams are bad. Those statistics can help make us think that the outcome of a game is sometimes determined before it's even been played. Additionally, with 162 games, the regular season for Major League Baseball is so long, and analysts and oddsmakers have a rich data set with which to determine the favorites and underdogs.

Ranking upsets is just as much a measure of our own expectations as it is performance. As fans, sometimes we tend to look past the players on the field, seeing only the numbers -- batting averages, runs scored, number of wins, etc. But like every sport, you have to play and win the games in order to hoist the trophy. As a general rule, the higher the stakes, the more dramatic the upset, so it should come as no surprise that three of our top five upsets took place in the World Series, the annual best-of-seven contest to decide Major League Baseball's best team.