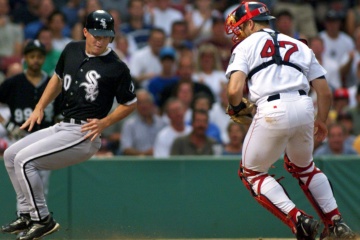 Baseball can be kind of weird. Take this play during which Chicago's Magglio Ordonez (#30) was on second base with two outs. His teammate singled to left field, and he didn't try to come home, but then he did. He dodged the catcher, missed the tag and the plate, and then headed back to third, was run down and tagged out to end the inning. See more baseball pictures.
Jim Davis/The Boston Globe via Getty Images

Major League Baseball Commissioner A. Bartlett Giamatti once favorably compared his sport's "law and lore" to America's system of jurisprudence. Giamatti was talking about a "level" playing field, but he might just as easily have been describing how both law and sport produce peculiar procedures from seemingly simple rules [source: Deford].

Take baseball's part-rule, part-event, part quantum physics experiment, the fourth out. Here one moment, gone the next, it is both an out and not an out. It is Schrödinger's out, and it makes the infield fly rule look simple by comparison.

A fourth out happens when a third out has already been made but a prior out on the same play -- typically caused by a rules violation -- has not yet been called. The defense successfully makes an appeal while the ball is still live, and the umpire calls a temporary fourth out that (usually) replaces the existing third out. This not only affects players' stat blocks; it can also deny the offense one or more runs [source: MLB].

To understand why, we must grapple with one of baseball's more baffling aspects: When does a run scored during the third-out play count?

If you think that a runner who crosses the plate before the defense makes its third out scores a run, you're not alone, but you're also not necessarily right. Under rule 4.09, the run would not count if, for example, the third out was a force-out -- an out against a runner who has lost the right to occupy a particular base because of the batter becoming a runner -- or if the third out is made against the batter-runner. Similarly, if two runners cross the plate near each other, but the first runner fails to touch either home or a previous base and is tagged out, then the second run won't count, even if he crossed before the tag (again, assuming two outs) [source: MLB].

The second example describes an appeal play, the key to triggering a fourth out. As the name suggests, an appeal play combines an appeal -- pointing out a rules violation to an umpire -- and a play -- tagging the base or the runner to make an out [source: MLB].

Even if you don't know it by name, chances are you've seen an appeal play -- say, when a runner scoring from second misses third base, or when a scoring runner from third fails to tag up on a caught fly ball. In either case, the fielder could alert the umpire and tag the bag or the runner to get the out. Well, if either of these circumstances happens during a third-out play, the resulting appeal play triggers a fourth out and removes the scoring run, because the runner is considered out at the base where the violation occurred, and therefore never scored [source: MLB].

Confused? A few examples ought to clear things up. Or not ...

The fourth out might sound like a mere bone for rulebook lawyers to pick, but failing to grasp its ins and outs can cost games.

Take the Arizona Diamondbacks in their April 12, 2009, outing against Los Angeles. In the second inning, Dodger Randy Wolf comes to bat with one out and runners Juan Pierre on second and Andre Ethier on third. Wolf drills a line drive to pitcher Dan Haren, who makes the catch, then chucks the cowhide to Felipe Lopez at second. With Wolf's ball caught, Pierre and Ethier, who ran at the crack of the bat, must now retouch second and third, but Ethier continues home, crossing the plate before Pierre is tagged out [sources: Gurnick; Hernandez; MLB; Piecoro].

Ethier's failure to tag up should trigger a fourth out that undoes his run, but the D-backs leave the field without making the necessary appeal play. Plate umpire Larry Vanover rules that the run is good, granting Los Angeles the tying run in what would be a 3-1 victory over Arizona. Too bad Lopez didn't just touch second base instead of running down Pierre and giving Ethier time to score. It would have saved a lot of trouble [sources: Gurnick; Hernandez; MLB; Piecoro].

Getting the hang of it? Let's try a more theoretical example, this time from the June 10, 2010, match between the Minnesota Twins and the Kansas City Royals. It's the bottom of the third, there's one out, and the Twins trail by three. Minnesota's Joe Mauer steps to the plate with runners Denard Span on second and Nick Punto on third. Mauer flies out, and Punto and Span scramble to tag up, but Span is beat out at second and the Twins are retired [sources: Boeck; MLB].

Rewinding the tape, we see that Span never touched third while returning to second -- a moot fourth out, since no run was at stake. But suppose Punto had made it home before Span's out? Better still, what if Span had been safe at second (but still cut third base) and Punto had scored (but failed to tag up)?

Confusing? Just wait. As Scott Boeck of USA Today points out, under these circumstances, the Royals could make two appeal plays -- one against Span for failing to touch third and one against Punto for not tagging up after the fly out. But which appeal would make the third out, and which would become the fourth out that replaced it [sources: Boeck; MLB]?

According to rule 7.10, when the defense makes more than one appeal during a play that would end a half-inning, it can choose which third out to keep. In this case, the Royals would keep Punto's fourth out to nix his run [sources: Boeck; MLB].

It's just that simple.

Author's Note: What is the fourth out?

As the fourth out reminds us, baseball's seemingly simple rules conceal a tangle of conditional triggers and oddball exceptions that can make the game feel inaccessible to first-timers. Don't believe me? Try explaining baseball to someone from another country.

Or consider this: The missed fourth-out opportunity that gained the Dodgers their extra run baffled most of the players and managers on both teams -- and they do this for a living.

Who Pays if You Get Smacked by a Foul Ball?
10 Must-see Fields to Visit Before You Die
What are the 9 baseball positions?