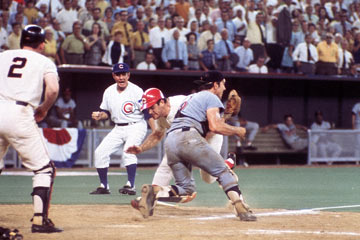 Pete Rose of the Cincinnati Reds bowled over Ray Fosse of the Oakland Athletics to score in the 1970 All-Star Game on July 14 in Cincinnati, Ohio. See more Sports Pictures.
Herb Scharfman/Sports Imagery/Getty Images

Baseball isn't typically considered a contact sport, thanks in large part to one rule: the obstruction rule. Back in the late 19th century, when baseball was still a relatively young game, collisions on the basepaths were becoming a problem, so Major League Baseball established the modern obstruction rule to give baserunners the right of way, preventing fielders from blocking their path [source: James].

The obstruction rule bans unsanctioned collisions on the basepaths by preventing defensive players from blocking the passage of the baserunners. According to the official rule book, obstruction is defined as "the act of a fielder who, while not in possession of the ball and not in the act of fielding the ball, impedes the progress of any runner." The question of whether or not the fielder is holding or attempting to field the ball is what determines whether or not he is guilty of obstruction. And it doesn't matter if the fielder actually makes contact with the baserunner; if the fielder doesn't possess the ball and impedes the baserunner's progress, causing him to change course or slow down, he is in violation of the obstruction rule.

If obstruction occurs, the play is immediately called dead and all runners advance one base, or "to the bases they would have reached, in the umpire's judgment, if there had been no obstruction." As with several other calls in baseball, the ruling is a judgment call made by the umpire, and opinions can vary on whether or not obstruction should or shouldn't be called in different situations [source: MLB.com].

As anyone who watches baseball regularly will tell you, collisions on the basepaths most commonly occur at home plate and second base. Of those, the home plate collisions are often the most dramatic, because a run is at stake and because they tend to be very violent. One of the most popular examples of a home plate collision was Pete Rose's collision with catcher Ray Fosse in the 1970 All Star Game, which ended in a run for the National League All Stars and a separated shoulder for Ray Fosse.

Since the 1970s, home plate collisions have increased in frequency -- but are collisions at home plate legal? Let's check with the rule book: "The catcher, without the ball in his possession, has no right to block the pathway of the runner attempting to score. The base line belongs to the runner and the catcher should be there only when he is fielding a ball or when he already has the ball in his hand." As many have argued, the obstruction rule simply isn't enforced at home plate, as catchers routinely block home plate before the ball reaches them.

As a baseball fan, I thought I knew everything about how the rules of the game, but I wasn't aware of the details of the obstruction rule and its background before researching this article. What would happen if the obstruction rule had never been introduced at the turn of the century? I imagine baseball would look a lot more like football or hockey, and we'd probably see a lot more injuries occur on the basepaths.