What's a double play in baseball? 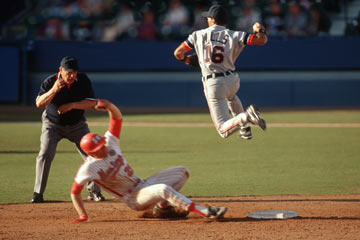 Sport is pageantry -- at least when played at the highest level. Basketball superstars Magic Johnson and Kareem Abdul-Jabbar running the fast break for the "showtime" Lakers of the '80s, football running back Barry Sanders leaving a trail of would-be tacklers in his wake, soccer player Lionel Messi landing a whirling bicycle kick: People pack the seats at major sporting events not just for the opportunity to be a part of the pomp, circumstance and $11 hot dogs, but also for a glimpse at poetry in motion.

On the baseball field, that poetry can be found in the double play, a deft maneuver that often involves three players in a snatch-toss-catch-tag-toss-catch maneuver that's so impressive it's worth two outs.

For newcomers to the national pastime, an "out" occurs when the defensive team: a) catches a ball hit in the air; b) tags a base runner with the ball while he is between bases; or c) "forces" a runner out by tagging a base to which the runner has to advance (for example, a runner on first base generally must run to second base if the ball is hit in play) before he reaches it. An offensive team continues to hit until three outs are recorded [source: Major League Baseball].

A double play is any combination of two outs in one single play, whether it be unassisted -- a fielder catches a ball hit in the air (out one) and tags a base runner with it between bases (out two) -- or involving the work of more than one defensive player [source: Major League Baseball].

A force double play, meanwhile, is one involving two force outs. With the bases loaded (runners on each base), for instance, the ball is hit in play; a fielder scoops it up and throws it to the catcher at home plate, who steps on the plate and throws the ball to first base before the runner gets there [source: Major League Baseball].

Even more rare is the so-called "strike 'em out, throw 'em out" double play, in which the first out comes on a strikeout and the second when a runner is caught trying to steal a base [source: Major League Baseball].

Like skinning a cat or pitting a cherry, there is more than one way to turn a double play. Just remember that taking down two of those pricey ball park hot dogs isn't one of them.

Baseball Hits: Fair or Foul?
What is a balk?
How Baseball's American League Works