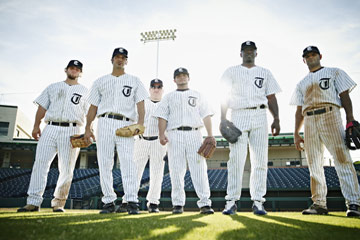 What do baseball players do once they take the field? See more sports pictures.
Thomas Barwick/Getty Images

Take me out to the ballgame, and I'll see pretty much the same thing whether I'm watching kids or professionals. Baseball teams have nine players. Each player takes turns at bat, and each plays a defensive position in the field. But who are they and what do they do?

The other seven defensive players are divided into infield and outfield. Their positions on the team are determined by tradition and what works rather than rules.

The infield is the area enclosed by the base lines. The infield positions are:

The outfield is the area beyond the infield. The left fielder, center fielder and right fielder spread out across the outfield and try to catch balls hit past the infielders. They also throw balls to the infielders to get runners out.

Now that we know the players, let's discuss their equipment on the next page.

Players and Their Equipment

All players on a team use the same basic equipment: They wear uniforms, caps and shoes with rubber cleats or metal spikes. On defense, fielders use a leather glove designed for catching balls. Rules determine the size of the glove and the construction of the webbing between the thumb and first finger.

I love baseball. I love the orderliness, the rules. A baseball game is almost like an old-fashioned dance. It's so much more formal than a lot of team sports. So I was glad to get this assignment. I know a lot of the basics already, but it was interesting to read the rules and learn some things, such as that only the pitcher and catcher have their field positions clearly specified in the rules.