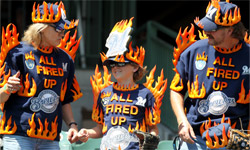 Look, baseball fans are crazy. These Brewers fans, all dressed up for a 2012 game between the Pittsburgh Pirates and Milwaukee Brewers, kind of prove our point. See more sports pictures.
Mike McGinnis/Getty Images

It's a simple rule of baseball fandom etiquette: If ever an argument ensues, the person who names seven statistics down to the third decimal place in support of his or her team wins the day. Go ask any bartender in Chicago, New York, St. Louis or Boston. It's true.

That's because baseball fans, no matter how much they might deny it, are number geeks at heart. Sure, the U.S. national pastime has depth, soul and history, but sportscasters need more than sentimental whimsy to talk their way through a game that usually lasts upward of three hours [source: MLB]. So out come the spreadsheets: RBIs, Hs, Rs, SOs, AVGs and many more.

But there's one thing that all the acronyms in the world can't shout down -- victories. If your team wins, it doesn't matter how many on-bases the other guy manages to get after the seventh inning on alternate Wednesdays. And the only thing bigger than a win is an entire streak of wins. Consider it a royal flush hand in the world of sports.

What's a streak? It's any consecutive number of victories by a single team or player. Note that we said victories. Tied games don't count.

By all definitions, a streak signifies dominance, because long streaks don't happen by accident. Sure, some of the wins within a streak may be chalked up to luck, but no team gets lucky 8, 9, 20, 21 or 26 times in a row. That's just skill.

So let's head out to the old ball game and explore some of the game's biggest winning streaks -- that mystical territory where baseball's soul, history and statistics converge.