The Baseball, All Five Ounces of It 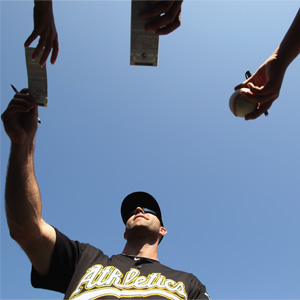 Kevin Kouzmanoff, of the Oakland Athletics, takes a second to sign some fan offerings, including a ball that hasn't changed all that much since 1872.
Ezra Shaw/Getty Images

There have been a lot of rule changes to affect baseball over the years, but one of the most significant came in 1872. That's the year officials standardized the most essential element of the game -- the ball itself. Since then, every baseball has been exactly the same, weighing 5 ounces (142 grams) and measuring 9 inches (23 centimeters) in circumference.

It's not just the finished dimensions that are regulated, either. The manufacturing process must also follow strict guidelines. To build a baseball, you start with a nucleus of compressed cork wrapped first in a layer of black rubber and then a second layer of red rubber. Around this go three windings of wool and one of cotton. Rubber cement holds the yarn in place until a two-piece leather cover can be applied using exactly 216 red, raised cotton stitches.

There's more to this than simple trivia. The size, shape and construction of a baseball affect every aspect of the game. Can you imagine playing baseball with a tennis ball? Both balls are about the same size, but they differ in one important attribute -- tennis balls have significantly more bounce. In baseball, bounce relates to the "liveliness" of the ball. Before 1911, which is when cork-centered balls entered the game, hitting home runs was more difficult because balls didn't have as much bounce.

To understand the physics of a baseball bounce, it helps to analyze a dropped ball to see what it does. Over the years, several researchers have run this exact experiment, using high-speed cameras. This is what they've learned:

Major League Baseball takes great pains to control the bounciness of its balls. After they're manufactured, balls travel to a testing facility where they're shot from a cannon at a velocity of 85 feet (26 meters) per second against a wood surface 8 feet (2.4 meters) away. Officials measure the rebound speed and then divide that value by the delivery speed. The resulting value must be 54.6 percent, plus or minus 3.2 percent. In other words, the rebound speed must be about 46 feet (14 meters) per second. Balls must also retain their shape after being subjected to a 65-pound (29-kilogram) force and distort less than 0.08 inches (0.2 centimeters) under compression [source: Nathan].