The Fine Art and Physics of Fielding 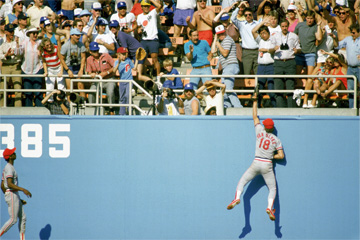 You're looking at five-time Gold Glove winner Andy Van Slyke, then playing for the St. Louis Cardinals and reaching for the catch against the Los Angeles Dodgers. Safe to say that Van Slyke knew a thing or two about the physics of fielding a ball.
Rick Stewart/Getty Images

The crack of the bat -- baseball's most iconic sound -- signals the end of a batter's stress and the beginning of a fielder's. The nature of that stress is quite different for a center fielder than it is for a third baseman. Let's start first with the physics of catching a fly ball by taking two common scenarios: a short pop-up that stays in the air about 5 seconds and comes down 250 feet (76 meters) from home plate, and a deep shot that stays in the air just over 4 seconds and lands 350 feet (107 meters) from home plate. If a center fielder positions himself 300 feet (91 meters) from home plate, he must move 50 feet (15 meters) in just a few seconds. Robert Adair, in his book "The Physics of Baseball," estimates that a typical outfielder can run about 30 feet (9 meters) per second, so getting to the ball would be relatively easy -- if he moved at top speed the instant the ball was hit.

Unfortunately, there's some processing time that must take place. For balls hit to his left or right, a center fielder will need 0.5 seconds to register the trajectory. That still gives him 3.5 to 4.5 seconds to get to the ball. But if the ball is hit directly at him, he will need two full seconds before he can sense whether he's dealing with a blooper or a monster blast to deep center [source: HowStuffWorks Videos]. That shaves his time to react considerably.

For these reasons, good outfielders analyze other factors before a pitch is even thrown. For example, they study their opponents' tendencies -- does a hitter like to hit to the opposite side of the field -- and cheat a few steps accordingly. They also watch the pitcher's delivery and the batter's swing for clues. If a ball breaks to the inside and "handcuffs" the hitter, the resulting swing will likely be far less powerful, allowing the outfielder to run in even before he gets a good look at the batted ball. Sound provides similar clues. A clunk indicates a collision outside the bat's sweet spot. A crisp crack is the telltale sound of a ball hitting squarely in the sweet spot. It only takes 0.3 seconds for either sound to reach a center fielder's ear, so listening to a hit can translate into one or two steps -- and the difference between a catch and a miss.

In the infield, fielders face different challenges, especially bad hops. First, consider the reality. If a batter hits a ball at 65 mph (105 kph), or 95 feet (29 meters) per second , toward third base, it will reach the fielder in about 950 milliseconds. The reaction time for a good infielder is 150 milliseconds, plus 50 milliseconds to move the glove [source: Adair]. That means he needs 200 milliseconds -- or 19 feet (5.8 meters) -- to make an adjustment. If a ball takes a bad bounce when it's closer than 19 feet, the fielder won't have enough time to correct his position and make a clean catch. If the bad hop occurs before then, say at 25 feet (7.6 meters), the fielder can make an easy adjustment.

Of course, he still has to make the throw to first. For a third baseman, this means slinging the ball 135 feet(41 meters) before the hitter covers 90 feet (27 meters). A fast runner will make it to first in about 3.0 to 3.5 seconds, so that's what the third baseman must beat. If it takes a second for the batted ball to reach the third baseman and another second for him to retrieve the ball from his mitt and throw, he only has 1.0 to 1.5 seconds to deliver the ball. How hard must he throw? Again, some simple math can answer the question.