How to Swing a Bat (From a Physics Perspective) 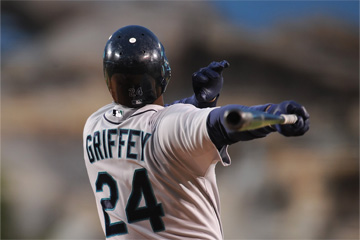 Ken Griffey Jr. bats against the Los Angeles Angels as a Seattle Mariner on May 29, 2009. The Kid's swing was much admired during his time in the majors, from 1989-2010.
Lisa Blumenfeld/Getty Images

The swing itself breaks down into two phases. At the beginning of the first phase, the batter stands with his feet spread to shoulder width, with the bat held nearly upright over the back shoulder (right shoulder for a right-handed hitter). As the ball approaches, the batter shifts his weight to his back foot and then pushes off, stepping forward with his opposite foot. This moves the batter forward, although the bat remains in its original position.

The second phase of the swing begins after the batter gets his front foot firmly planted. This foot then serves as a pivot point around which to rotate the body. Energy from the first step moves up through the legs and joins rotational energy created by muscles in the hips and torso, which pull the upper body around.

At first, the batter keeps his elbows bent, and the bat gains relatively little speed as it stays close to the body, moving in a small-radius arc. Over a few milliseconds, his arms straighten, and the bat levels out until it lies in a horizontal plane. Both the bat speed, and the radius of the arc it traces, increase dramatically through this part of the swing. When the bat finally makes contact with the ball, with both arms pulling at right angles to the motion of the handle, the barrel is moving between 70 and 80 mph (113 and 129 kph) and can generate 6,711 watts of power (9 horsepower) [source: Adair].