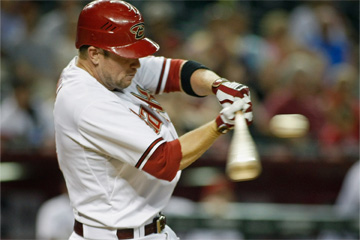 Aaron Hill, of the Arizona Diamondbacks, hopes for a successful bat-ball collision as he swings at a high fastball from Colorado Rockies pitcher Guillermo Moscoso during a game on June 5, 2012, in Phoenix.
Ralph Freso/Getty Images

On the last page, we discussed what happens to a baseball that's dropped straight down to a hard, flat surface. The same principles apply when a bat collides with a ball, but much larger forces and energies are involved. Remember, a pitched ball approaches 100 mph (161 kph), while a swung bat travels between 70 and 80 mph (113 and 129 kph). Bring the two together, and a tremendous force acts on the ball in one millisecond.

At the moment of impact, the ball compresses and comes to a momentary halt. The bat also compresses, though not as much. Then the ball reverses direction and leaves the bat at a certain velocity and at a certain angle, returning to its original shape as it does. The force acting on the ball and its compression depend, of course, on the intensity of the batter's swing. The stats below shows the peak force (in pounds) and compression for a ball hit with different types of swings [source: Adair]:

As we've already discussed, the compression of a baseball is an inefficient process. A large fraction of the ball's original energy dissipates as frictional heat caused by the squeezing, stretching and rubbing of the polymers that make up the ball's internal structure. Baseball geeks and science types describe this inefficiency using a value known as the coefficient of restitution (COR). For a perfectly elastic collision, one in which no energy is lost, the COR would equal 1. For a perfectly inelastic collision, the COR would equal zero (and the two colliding objects would stick together -- think Silly Putty smacking a surface).

To calculate a ball's COR, you take its velocity before it collides with a hard, immovable surface and divide it by its velocity after the collision. Recall that this is the test we described in the last section, which would look like this as an equation (note: for simplicity's sake, we'll omit the metric conversions here):

For collisions typical in baseball, this is the expected value for the ball's COR. As a measure of ball liveliness, the COR has important implications for the game. Increase the COR, and hit balls will travel much farther. For example, a ball with a COR of 0.6 would travel about 115 feet (35 meters) farther than a ball with a COR of 0.4 (assuming constant bat and ball velocity).