Pitching: It Starts With the Legs 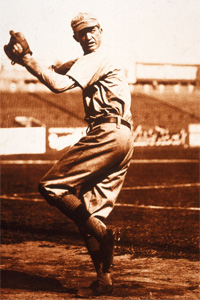 With 373 career wins, something about Hall of Famer Grover "Pete" Alexander's windup sure worked well for him.
Hulton Archive/Getty Images

When people talk about pitching, they often discuss how fast the ball travels to the plate. But where does a high-powered fastball get its energy? As Hall of Fame right-hander Early Wynn once said, "A pitcher is only as good as his legs." That's because a 94-mph (151-kph) fastball begins its life below the pitcher's belt, gathering energy from the legs and unleashing it through the trunk of the body and then to the arm.

To generate all of that energy, a pitcher must be able to throw an energetic ball consistently and accurately without unnecessarily straining the body. Although form and technique can vary wildly, most successful pitchers incorporate seven basic components into their pitch delivery. Let's walk through them, assuming a right-handed pitcher throwing with no runners on base:

The ball now carries the energy generated in the pitcher's windup and delivery. How much? Physicists would use the following formula: