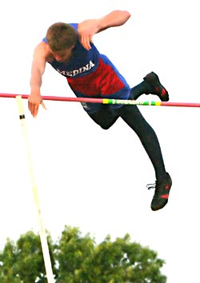 If you read the article How Force, Power, Torque and Energy Work, you learned all about potential energy (PE) and kinetic energy (KE). Let's try to figure out how high a pole vaulter could vault if he had absolutely perfect technique. If he ran as fast as anyone in the world, and his vaulting motion was so perfect that he wasted no energy.

First, we'll figure out his kinetic energy when he is running at full speed, and then we'll calculate how high he could vault if he used all of that KE to increase his height and, therefore, his potential energy (PE) without wasting any of it. If he converted all of his KE to PE, then we can solve the equation by setting them equal to each other:

Since mass is on both sides of the equation, we can eliminate this term. This makes sense because both KE and PE increase with increasing mass, so if the runner is heavier, his PE and KE both increase. So we'll eliminate the mass term and rearrange things a little to solve for h:

Let's say our pole vaulter can run as fast as anyone in the world. Right now, the world record for running 100 m is just under 10 seconds. That gives a velocity of 10 m/s. We also know that the acceleration due to gravity is 9.8 m/s2. So now we can solve for the height:

So 5.1 meters is the height that a pole vaulter could raise his center of mass if he converted all of his KE into PE. But his center of mass is not on the ground; it is in the middle of his body, about 3 ft (1 m) off the ground. So the best height a pole vaulter could achieve is in fact about 20 ft (6.1 m). He may be able to gain a little more height by using special techniques, like pushing off from the top of the pole, or getting a really good jump before takeoff.

Now that we've done this calculation, let's look at what a vaulter can do to try to break the record. They have two main ways to increase the height of his vault. One is to increase his running speed, which increases the amount of kinetic energy he can use. The other is to make more efficient use of the energy, perfecting his technique so that absolutely no energy is wasted.