by Stephanie Watson
NEXT PAGE 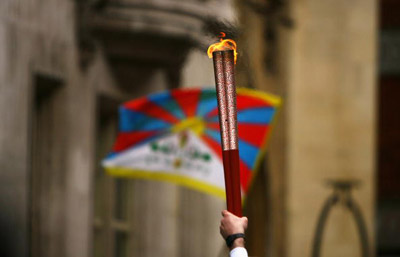 The Tibetan flag flies as the 2008 Beijing Olympics torch is carried by respected sports personalities and celebrities from Wembley Stadium to the grand finale at the O2 Dome, April 6, 2008 in London, England. See more Olympics pictures.
Warren Little/Getty Images

Every two years, people around the world wait in anticipation as a torch-bearing runner enters the Olympic arena and lights the cauldron. The symboli­c lighting of the Olympic flame marks the beginning of another historic Olympic Games.

The opening ceremony is the end of a long journey for the Olympic torch. By the time it arrives in the stadium, it has traveled thousands of miles. It may have crossed oceans and deserts and traversed mountains. It may have been carried on planes, trains, bicycles, boats, and even dog sleds. And it will have passed through the hands of thousands of different people around the globe.

This article chronicles the history of the Olympic torch, reveals how it is designed to stay lit through even the harshest weather conditions, and follows its path from Olympia, Greece, to the Olympic Games.