by Elizabeth Nixon
NEXT PAGE 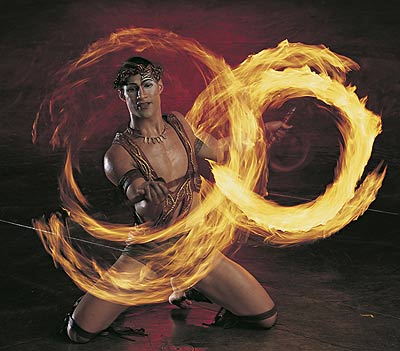 Any way you look at it, Cirque du Soleil is a phenomenal success story. In only 20 years, it has carved out a unique niche in the entertainment industry, spread to cities all over the globe and earned rave reviews every step of the way. And it's doing just fine financially too: Cirque's assets are worth an estimated $1 billion, its annual ticket sales have climbed above $450 million, and more than 40 million people worldwide have attended at least one Cirque show.

You can attribute this massive popularity to the extraordinary experience of actually seeing a Cirque show. The combined work of performers, directors and the backstage crew add up to a completely original whole that leaves most audiences in awe. Just about everywhere Cirque goes, its reputation seems to precede it.

As you might expect, it takes a lot of work and talent to put an awe-inspiring show like this together. In this article, we'll go under the "Grand Chapiteau" of the touring show Alegria to uncover the magic of Cirque du Soleil.

Cirque du Soleil was born in 1984, when a group of Montreal fire-eaters, stilt-walkers and juggling street performers joined forces to create one show that had everything. Over the years, the Cirque group grew, creating new shows and spreading to new cities.

Today Cirque du Soleil has five touring shows and six installation shows (shows that stay in a single city). Cirque plans to add a new show to their lineup each year.

While its shows and touring operations have become more sophisticated, Cirque du Soleil has never strayed from its street performer roots. Unlike three-ring circuses, which feature animal acts along with human performers, Cirque du Soleil has always been solely devoted to the extraordinary talents of performers. In assembling a show, the Cirque crew gathers diverse talent from all over the world and brings all the performers together into a cohesive whole.

Whether it's a touring show like Alegria or Varekai or a resident show like "O" or "Love" in Las Vegas, all Cirque shows are built around the same two core elements: a unique theme and a unique soundtrack. As we'll see, these two essential elements guide the development of each show's acts, sets and costumes.

To purchase tickets for Cirque du Soleil or to check out the schedules and locations of their shows go to http://www.cirquedusoleil.com