When the great Native American multisports star Jim Thorpe blew away his competition in the decathlon at the 1912 Olympic Games, Sweden's King Gustaf V — a pretty fine tennis player, by the way — reportedly grabbed the champion's hand, shook it and declared, "Sir, you are the greatest athlete in the world."

Thorpe was a pretty good baseball and football star, too, in the early part of the 20th century. But it was that gold medal in those Stockholm Olympics that brought him his biggest fame. And thanks to Thorpe (with a hat tip to the Swedish king), every winner of the Olympic decathlon now earns the unofficial title: The World's Greatest Athlete.

"I like the title — it's fun, but who can really say how accurate it is? Bo Jackson might have been the world's greatest athlete. Maybe Michael Jordan," Dan Steele, the associate head coach for track and field at Iowa State, says in an email. Steele recruited U.S. decathlete Ashton Eaton, the defending Olympic gold medalist and the reigning world record holder, to the University of Oregon. "When it comes to Ashton Eaton, his body of work makes a pretty compelling case for that title."

In the decathlon, you don't have to constantly zip back and forth, like basketball or soccer or rugby or hockey players do. You don't risk life and limb as in downhill skiing or ski jumping or even auto racing.

So ... really? The decathlon? The greatest athlete?

"You might say an outstanding person, like [the NBA's] LeBron James, or a great football player could win the decathlon, and maybe they could," Fred Samara, a former Olympic decathlete (he competed in the 1976 Games) and the longtime coach of the Princeton track and field team, tells HowStuffWorks. "But would they be able to win the pole vault? Would they be able to run the mile?

"So, yeah, to say 'The World's Greatest Athlete,' that may be a little bit of a stretch; there's billions of people in the world. But the athlete that wins the Olympic gold, or is the world record holder [in the decathlon] certainly can lay claim to being one of the world's greatest athletes, I think. That's for sure."

The Deal on the Decathlon

To get an appreciation of why decathletes evoke such praise, it's important to understand what the decathlon is. It's a series of 10 varied track and field events held over two days. Points are awarded to each competitor after each event, and the cumulative points are tallied to produce a winner.

The events, in order, on the first day are the 100-meter run, long jump, shot put, high jump and 400-meter run. The second day is packed with the 110-meter hurdles, discus throw, pole vault, javelin and 1,500-meter run (sometimes called "the mile").

The decathlon demands speed, endurance, strength, agility, flexibility and coordination. To be sure, a decathlete needs more than that, too.

"It's really the mental fatigue and the ability to focus over 14 hours on each day that takes its toll," Samara says. "The hard part that I found, in competing in over 40 decathlons, is the length of the meet. You're on your feet all the time. Each event, you're warming up and warming down. I can remember being so exhausted, mentally, that I just was out of it. I think that's the real test."

Says Steele, who was a silver medalist in the decathlon at the 1999 Pan-American Games: "The decathlon is hard and humbling. If you don't love the fight, you won't last long in the event."

Jim Thorpe, the man who got all this greatest athlete in the world business started, attacks the broad jump at the 1912 Olympics.
George Rinhart/Corbis via Getty Images

Despite Gustaf's ever-ringing words about the decathlon champ of 1912 — to which, by the way, the famously stoic Thorpe reportedly replied, "Thanks, King" — many other athletes might claim that their sport produces the greatest or, at least, the "best all-around" athlete.

Several years ago, ESPN tackled the question, asking eight experts to rank 60 sports on "degree of difficulty." When the ciphering was done, boxing was declared the "toughest" sport.

Most of the categories in the ESPN study, if not all, were ones that apply to decathletes: endurance, strength, power (short bursts of strength), speed, agility, flexibility, durability (the ability to keep going under physically challenging circumstances), nerve (no fear), hand-eye coordination and analytic aptitude (the ability to evaluate and react to changing situations in a competition).

Interestingly, though, the ESPN study didn't rank the decathlon. It did include individual track and field events. The pole vault was rated the toughest of those, coming in 16th overall.

"There are amazing athletes in all professional sports, but at the end of the day unless they step out on the track and compete in 10 events over two days we'll just never know how great an athlete they really are," Nate Davis, an assistant coach at the University of Wisconsin, emails from Rio. He's at the Olympics with Zach Ziemek, a recent Wisconsin grad who is one of the three decathletes, along with Eaton and Washington's Jeremy Taiwo, competing for Team USA in Brazil.

"I think it's a respected title amongst all sporting men and women because it is the one challenge in sport where you have to have all of the sporting skills," Davis writes, "and you have to perform them at a high level."

NOW THAT'S INTERESTING
In 1913, the International Olympic Committee stripped Thorpe of his medals (he won gold in the pentathlon, too) for playing paid stints in professional baseball in 1909-10. After years of public pressure, though, the IOC reinstated his medals in 1983, 30 years after his death.

Nothing to Sneeze at: Allergies May Affect the Brain 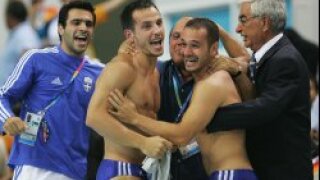