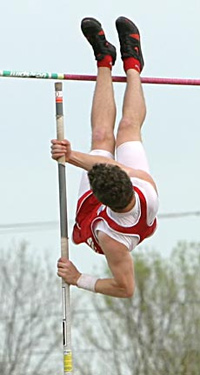 The pole vault originated in Europe, where men used the pole to cross canals filled with water. The goal of this type of vaulting was distance rather than height.

In the late 1800s, colleges started competing in the pole va­ult. Originally the vaulters used bamboo poles with a sharp point at the bottom. They competed on grass, planting the point in the grass (because holes were not allowed back then), vaulting over a pole and landing back on the grass. In the 1896 Olympics, the record, set with a bamboo pole, was 10 ft 6 in (about 3.2 m).

As heights started to increase because of improvements in technique and materials, mats started to be used for landing. Now the modern pole vault takes place on an all-weather track surface, with a box for planting the pole in, and plenty of padding in the landing pit. Modern poles are made of advanced composite materials like carbon fiber.