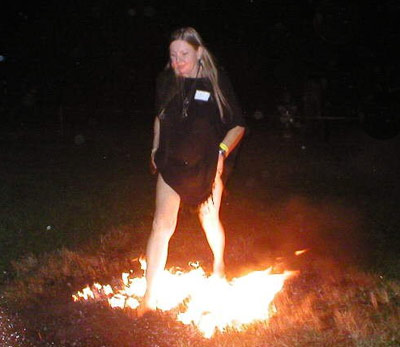 I would like for you to imagine the following situation: You get a call one day offering you the chance to win a million bucks. It's a new reality show that takes ordinary people and asks them to do extraordinary things. All that you have to do to win $1 million is a little firewalking -- simply saunter across a bed of burning coals on live TV.

Would you do it? Firewalking is one of those strange things that lots of us wonder about -- people seem to be able to do it without getting burned. But could just anybody do it? Is there some kind of gimmick that makes firewalking possible?

If you ever watch a firewalking event on TV or in a movie, you know that what you always see is a large, glowing bed of burning coals. The bed may be 10 feet long or so. And the glowing coals are real. People actually do walk across the red coals in bare feet. The firewalker makes his way across the coals as though by magic. How is this possible, and can any other person do it just as easily?

In this article, you will learn exactly how "firewalkers" walk across a bed of glowing coals without getting burned! 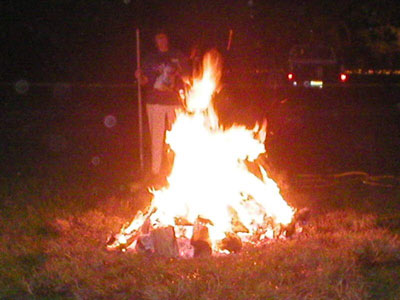 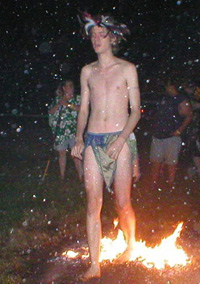 Why is it possible for bare feet to touch red-hot coals without getting burned? The coals start out as pieces of wood. The wood consists of lots of carbon, some "volatile organic molecules," and water.

If you were to pick up one of these pure-carbon coals, you would notice that it is extremely light. Carbon is a lightweight element -- that's why carbon-fiber bike frames and tennis rackets don't weigh very much. A coal is mostly lightweight carbon atoms and air spaces (it does contain a few other elements, like potassium and calcium -- that's what left behind in the ash).

This lightweight carbon structure is a poor conductor of heat. It takes a relatively long time for heat to transfer from the glowing coal to your skin. If the coal were made of red-hot metal, heat transfer through conduction would be almost instantaneous -- you would get a severe burn.

Now, add to that the fact that ash is a very good insulator. People used to use ash to insulate ice boxes and such. The red-hot coals covered with ash transfer their heat even more slowly because the ash acts as a layer of insulation.

Then there is the short time span. Heat transfer from a red-hot coal is slow, but it still happens. If you were to stand still on the coals for several seconds, you would definitely get a burn. By walking briskly, you limit your contact with individual coals to a very short time span. You also get across the bed of coals very quickly, and that limits your total amount of coal time. So, your foot never gets hot enough to burn.

That's the whole story! For more information on firewalking and related topics, check out the links on the next page.