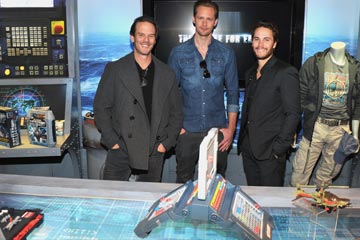 A computerized version of the game, Electronic Battleship, was first released in 1977 and was played using the same rules as traditional Battleship -- with one important exception. Instead of saying "hit" or "miss," players entered coordinates into the computerized game board by sliding a number switch and a letter switch into position on a track and pushing a button to save the information in the computer's memory. The computer rewarded them with a flashing red light and the sound of an explosion for a hit or a whistling sound for a miss [source: Board Game Geek].

The first version required players to manually enter the coordinates of each peg space that each of their ships covered, one at a time. Later versions included 100 preprogrammed board setups that players could key in a short code to load [source: Hasbro]. As clunky as it was, at the time of its debut it was something of a technological marvel to many Battleship players. It was released the same year as the Apple II, the Commodore PET and the TRS-80; many consumers were only just beginning to explore, build and program personal computing equipment [source: Computer History Museum].

An electronic "talking" version of Battleship was produced in 1983 that included several advances, including a computerized voice that would announce things like "Battleship hit!" The game also made it possible for one person to play against the computer [source: Board Game Geek].

A 2001 Electronic Battleship Advanced Mission introduced a new arsenal of weapons, including Tomahawk and Apache missiles and torpedoes. And digital versions of Battleship are now available for smartphones, as well as portable gaming systems like the Nintendo DS. In addition, a game called "Battleship: The Tactical Combat Game" was produced by Electronic Arts (makers of Battlefield 3 and Madden NFL 12) for the iPad; this version of the game includes high-quality graphics. Ships rock in a sea made tumultuous by near misses or sink from direct hits. Players can battle in one- or two-person mode and play several variations of the game, including a multishot salvo version [source: Hasbro].

Although Battleship doesn't have a plot, a 2012 movie loosely based on the board game does. Directed by Peter Berg, who also directed "Hancock," the action in "Battleship" centers on an oceanic battle with Transformer-like alien robots. The movie's subplot includes a forbidden love affair between a soldier (Taylor Kitsch) and the daughter (Brooklyn Decker) of his superior (Liam Neeson) [source: Wigler]. A PS3 and Xbox 360 first-person shooter titled "Battleship: The Video Game," published by Activision, will be based on the movie -- and, hence, the board game -- too [source: Raby].

I don't think I ever attended a family reunion that didn't include at least one round of Battleship. Every member of my extended family seemed to have the game, and my cousins were always ready to play. Although the numbers of red and white pegs seemed to dwindle from year to year, we could still count on Battleship to be a tried-and-true form of entertainment.

Researching the strategies -- and math skills -- behind the game, however, has led me to a whole new level of appreciation. It's a wonderfully sneaky way to teach my children, some of whom are just the right age, a bevvy of pre-algebra skills -- all under the guise of game night. Plus, there's an iPad version that my husband I have been known to play long after our babies were tucked into bed. If there was a lifetime achievement award for board games, Battleship should get one. If not for its complexity, at least for its staying power.