How to Play Battleship 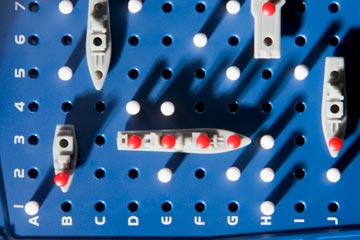 Part of the bottom half of a Battleship board, with one ship already sunk.
Hemera/Thinkstock

For much of its life, Battleship was a traditional board game played without electronic bells and whistles, and the only sophisticated graphics happened in players' imaginations.

Even now, the board game version of Battleship isn't that much different from one that would have been played 30 years ago. The box includes two self-contained plastic game boards in which the game pieces -- five ships, 42 red "hit" pegs and 84 white "miss" pegs each -- are stored. To begin the game, players sit across from each other; this allows your ships' positions and strategy to remain covert.

When opened, each game board will reveal a lower grid with coordinates that are identified by the numbers 1 through 10 horizontally and the letters A through I vertically. Players strategically place their ships on this grid, hoping to avoid enemy fire. The ships each require a set number of hits before they will sink:

When you are on the defensive and an opponent calls out a coordinate that results in a direct hit to one of your ships, you mark the hit by inserting a red peg into the corresponding spot on your ship on the lower grid. (Take care not to say which ship was hit or you'll give your opponent an unfair advantage.) If it is a miss, you simply say, "miss," and the next turn begins.

Each game board also has an identical upper grid. Players take turns firing at their opponents' ships by calling out coordinates and tracking their hits or misses on the upper grid. For example, if you are on the offensive and you call out A-6, your opponent will say "hit" if your shot struck one of his ships. You'd then put a red peg in the corresponding coordinate on your upper grid. If it is a miss, then you will place a white peg in the corresponding coordinate. If you sink all your opponent's vessels before he sinks yours, you win the game.

If you're a more advanced player and ready for faster game play, consider opting out of the traditional "one turn, one shot" rule. The official Battleship rulebook also contains instructions for a salvo version of the game, in which each player is able to fire as many shots during his turn as the number of ships he has afloat. For example, if you have three ships still in play, you can fire three shots at the enemy during your turn.