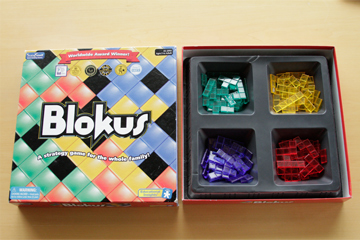 Whatever you call it, this game is addictive!
Photo by Elizabeth Johnston/HowStuffWorks.com

First of all, let's get something straight. It's pronounced "block-us."

Sure, it looks like it could be "bloke-us," "bloke-use" or some variation thereof. But the name Blokus -- a popular hobby game -- is easily recalled when you realize that the title indicates what happens in the game. You're blocking your opponents, stymieing them at every turn for game domination.

Blokus hinges on a pretty simple concept: In a traditional game, four players select a color and are assigned 21 game pieces in that color in a variety of geometrical shapes. The goal of the game is to put as many of your pieces on the board as possible. The trick? You must position your shapes so they touch other pieces of your color -- and only on the corners. That is, no sides touching and no pieces free-floating without touching your color.

You can also play Blokus as a two-player game or on teams, with players or teams controlling two colors. Three people can play if one player adopts two colors or if the pieces in the fourth color are placed on the board randomly.

Easy as (several pieces of strangely shaped and noncontiguous) pie, right? You wish. Blokus hasn't won handfuls of awards in the past few years without requiring a fair amount of strategy and skill. And the list of prizes is impressive: Since its 2000 release, Blokus has snagged the Grand Prix du Jouet in France, the Spiel des Jahres award in Germany, Best Game Award in Japan, Best Strategy Game Award in the United States and Vuoden Peli in Sweden, to name only a few.

Along with all the sweeping acclaim and gushing speeches that no doubt come along with winning national game awards, as of 2012, Blokus has already made itself at home in about 3.4 million households worldwide [source: Blokus]. In other words, this game isn't just for insiders; it's a proven hit.

It's no wonder that people have embraced it, and many have cited it as more than just a good way to spend a half hour with the family. In the next pages, we'll explore how educational studies have pointed out Blokus' ability to teach problem solving, and hobby games in general have been shown to help people with long-term and short-term reasoning -- including investment strategy.

While it's an absurdly easy game to learn, it can be mind-bendingly frustrating to master. Let's get the easy part out of the way first.