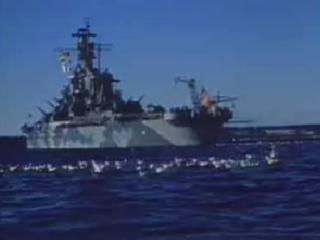 Curious about real naval battles and technology? Check out these videos to learn more about everything from ancient Greek warships to WWII giants.
Discovery

"You sunk my Battleship!" It's a refrain from many a childhood, and one that attests to the power of marketing. Scores of people who saw the TV commercials for the game Battleship from the 1960s to the 1980s have uttered the catchphrase -- whether they were actually playing the game or not.

A classic, two-player game purportedly for players ages 7 and older, the object of Battleship is to sink an opponent's ships before he sinks yours by guessing where on a 10-by-10 grid his ships are located. Although the concept is a simple one, the game can be full of suspense as players attempt to guess their opponent's ship positions while hopefully concealing their own amidst imaginary rolling seas and explosions.

Battleship has experienced a number of incarnations through the years, but it began as a pencil and paper game first played around the turn of the 20th century. It was reportedly invented by Clifford von Wickler, and became popular with French and Russian soldiers during World War I. The game was similar to other popular games of the era, including Tic-Tac-Toe or Hangman. While some players may have called it Battleship, dozens of other names were used by enthusiasts around the world, such as Sea Battle, L'Aero Naval, Normandie, Seeschlacht and Affonda la Flotta.

By 1931, a commercially manufactured game consisting of papers with printed grids depicting land and sea were being sold by Starex Novelty Co. under the name Salvo, a moniker that referred to the simultaneous firing of bombs or firearms. Two years later, a competitor released Combat, the Battleship Game, and by 1943, board game powerhouse Milton Bradley had taken notice. Even so, Milton Bradley's debut battleship-style game, Broadsides, the Game of Naval Strategy, was a pencil-and-paper version. It wasn't until 1967 that the company released its iconic Battleship game, forgoing paper for plastic grids and ships, with colored pegs to record hits and misses [source: Board Game Geek].

Since then, Battleship has undergone a number of updates and revisions. Hasbro, the game's current manufacturer, offers a suite of Battleship options that range from card games to iPad and online versions. As of 2012, there's even a Battleship-branded movie that stars Liam Neeson and depicts a fleet of ships that, not surprisingly, battle an enemy armada.