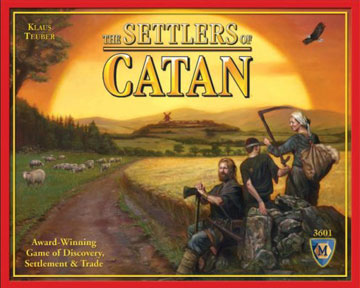 Settlers of Catan addicts are an increasingly common sight. They typically haunt the hallways of workplaces and the tables of coffee shops, nervously pawing pocketfuls of hexagonal terrain cards while trying to talk their friends and co-workers into a quick game or two. You'll even find them in schools, feverishly pushing their favorite board game on their classmates.

At first glance, Settlers of Catan (for ages 10 and up) may not seem very exhilarating. Three to four players assume the role of settlers seeking to dominate the fictional island of Catan. There are no battles. There are no elaborate props, and the goal isn't to ruthlessly annihilate your opponents. Instead, players spend the game exploiting the island's natural resources, building cities and diplomatically trading with one another. It's just like the real world, except without all the endangered animals and vanishing natural habitats.

Competition, however, does indeed lurk in Catan. At the end of play, only one person will generate enough points to emerge victorious. Yet the game design makes it impossible for anyone to win without some degree of cooperation. Players deal in five separate natural resources, and no one has reliable access to all of them.

Settlers of Catan is what board game enthusiasts call a German-style game. In fact, given its worldwide popularity, Catan has become the epitome of German game mechanics that favor nonviolence, cooperation and invigorative thinking. As of 2011, its worldwide sales have exceeded 25 million copies [source: Keyes].

The time-sucking diversion is the brainchild of Klaus Teuber, who back in 1991 was a German dental technician with a passion for teeth and game design. He'd already conceived of one successful board game called Barbarossa, but it was the idea for an island adventure title that would rocket Klaus to international success. A jury of German game critics named Settlers of Catan German Family Game of the Year in 1995, and its popularity soon spread to the United States. Today, the game is available in more than 30 different languages, as well in several computer, video game console, smartphone and tablet formats.

So how do you play this trend-setting past-time? Read the next page to find out.