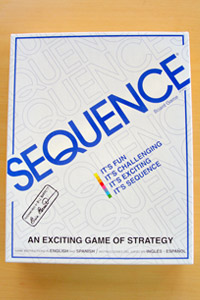 Rumor has it that the signature stamp below the title ("Recommended by Bill Barrett") is both a marketing ploy and in-joke. Apparently, Barrett, a toy sales representative, mentioned to the creators that recommendations lead to better sales -- whereupon they asked if he recommended it, and he said "Sure!"
Photo by Elizabeth Johnston/HowStuffWorks.com

You surreptitiously hold a red poker chip in one hand, scanning the board for configurations of blue chips, weighing the odds. In your other hand, you hold a suite of seven cards, one of which is the only card you need to connect the four chips you've already placed on the board -- and thus create a game-winning sequence.

Unfortunately, you'll need to wait your turn. And, as your opponent contemplates his next move, you can't help but wonder if he'll beat you to the punch and play a sequence of his own. Or if he holds a one-eyed Jack -- or a two-eyed Jack, or a copy of the card you hold -- that he could use to block your play. In a game of chance, even the best-laid plans can run amok.

Although you'll find it in the board game aisle, Sequence is both a board game and a card game. Players place chips on the board in spaces that correspond with the cards that they hold. The object is to place five chips of your color in a row -- horizontally, vertically or diagonally -- before an opponent does. You'll also need to watch out for wild Jacks, which allow an opponent to remove your chip or place a free chip of his own anywhere on the board.

In the original version of the game, a single player must make two sequences in order to win. Other Sequence versions, as well as games incorporating team play, may require only one sequence to win.

Sequence is manufactured and marketed by Jax Ltd., a Minneapolis, Minn.-based company known for its casino games and accessories, as well as other board and card games like Rock, Paper, Scissors: The Card Game, Kazink!, Take Away, Triple Four, Over and Out, and Shake Up.