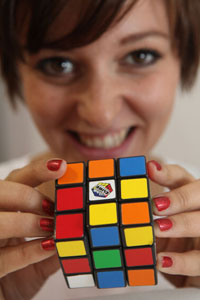 How do you get all six sides of a Rubik's Cube the same color? See more pictures of toys and games.
Tim Whitby/Stringer/Getty Images

I slumped down in the forest green vinyl seat aboard the yellow bus, focusing on the task at hand. In 20 minutes, we'd pull into the parking lot at a rival school for a volleyball match. Until then, a different competition was far more pressing: a Rubik's Cube showdown.

My friend and I were silently at war, twisting and turning the rows on the three-dimensional cube, willing the colors to line up. Or at least I thought we were. When the bus screeched to a halt, I struggled with a few final moves, but my opponent was already done, thanks to some surreptitious actions in the seat behind me. She'd peeled off and repositioned the stickers in near-perfect form. Whether or not she followed the rules, I had to admit it was clever. After all, she solved the puzzle before I did.

Like most children of the 80s, we toyed with a classic Rubik's Cube, a square that measured 2.25 inches (5.7 centimeters) on each of its six sides, a design that remains largely unchanged today.

To begin solving a Rubik's Cube, you must first decipher the universal shorthand used to spell out a sequence of moves:

After mixing up the colors by turning the rows at random, the object is to make each face of the square a solid color again. This sounds simple enough, but for some, the Rubik's Cube has become a frustrating mystery. For others, it's a task that can be accomplished in a matter of minutes.

Since the early 1980s, Cubers have been setting world records. In 2011, Feliks Zemdegs of Australia solved a Rubik's Cube in a mere 5.66 seconds [source: The International World Record Breakers' Club]. Others have mastered Rubik's Cube solutions while blindfolded, with a hand tied behind their backs and by using only their feet.

So, what's the basic method behind solving that colorful cube?

Tips for Solving a Rubik's Cube

There are many strategies for solving a Rubik's Cube, but there's one basic method most Cubers learn first.

With the cube facing you, make quarter-turn rotations until the same color squares appear in a cross or plus sign. Keep in mind that the center square is static. If the side you chose to solve first has a white center square, you'll want to line up other white squares to form a cross.

From here on out, it gets a little more complicated. After forming a white cross, seek out white corner pieces. To do this, you'll make a counterintuitive move: Put the top corner piece in the bottom row below its final destination. Then, move the row in this sequence: Ri, Di, R and D. Repeat this until the top corner pieces are in place and the first side of your Rubik's Cube is solved.

Flip the cube and place the solved side to the bottom. Your task is to make the edge pieces in the middle layer all the same color on the side that is now facing you. This will require a two-part mini-strategy. First, you'll perform U, R, Ui, Ri, Ui, Fi, U and F to create a vertical, same-color lineup in the middle of the cube. Second, you'll move Ui, Li, U, L, U, F, Ui and Fi to move all the edge pieces to the proper place. At this point, the bottom row and second row of your cube should be solved all the way around.

To solve the top and final row, you'll create a yellow cross using a protracted series of rotations. Keep in mind you may need to do this sequence several times to solve the final piece of the puzzle: R, U, Ri, U, R, U, U and Ri.

From there, it's just a matter of putting the yellow edges into place. If you have one edge that's solid yellow (all three yellow squares lined up), turn your cube to place the solved edge at the back. However, you may not have any yellow edges that are solved. In this case, you'll need to experiment to find out which direction is most effective. As you rotate, follow the sequence: U, R, Ui, Li, U, Ri, Ui and L. You'll need to repeat this two or four times to solve each corner, but before long, your Rubik's Cube will no longer be a mystery [source: Science Buddies, You Can Do the Cube].

Author's Note: How to Solve a Rubik's Cube

I first learned to solve a Rubik's Cube without the aid of a sequence cheat-sheet. I was certainly stumped by the infernal squares on occasion (and no one ever worried that I'd enter a speed-cubing competition). I think there's something to be said for diving right in and working out a solution. It's an approach that's come in handy over the years, whether mastering the Towers of Hanoi puzzle or taking on the deceptively simple rules of Go. That said, if I had had access to a Rubik's Cube how-to article at the time, I must admit: I probably would have read it beginning to end.