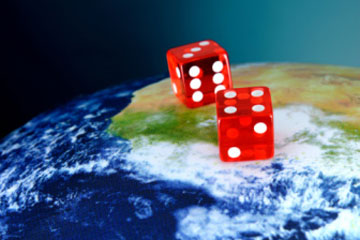 Are you ready to be supreme ruler of the world?
iStockphoto/Thinkstock

Do you secretly harbor the dream of being the supreme ruler of the entire planet? If so, then we have a game for you. Risk, invented in 1957 by French filmmaker Alber Lamorisse, originally was marketed in France as "La Conquete du Monde" (in English, "The Conquest of the World.") Parker Brothers introduced the game in the United States in 1959. While the name eventually was changed to the somewhat less megalomaniacal-sounding Risk, the basic objective remains the same: Eliminate all your competitors and capture control of all the territory on the game's board [source: Hasbro].

In the 1960s, Risk became one of the most popular board games in the United States, and gradually developed into a cult favorite among brainy college students. Risk's enduring appeal over more than a half-century probably has a lot to do with its intellectual challenges. It was one of the first games in which players' non-linear movements were determined by their own choice, rather than by dice or a spinner. And while luck does play a role, the outcome is more heavily influenced by players' strategic abilities -- formulating and executing plans, estimating probabilities, logical sequencing and adjusting to opponents' tactics [source: Hinebaugh].

Besides being fun, Risk also is great for developing your mind in ways that will pay off in school or in a career, because the strategic skills players learn and practice are easily transferable to real-life endeavors. As Jeffrey Hinebaugh explains in his book "A Board Game Education," aside from Monopoly, Risk is probably the best board game for practicing negotiating skills. While Risk's official rules don't recognize alliances and agreements among players, in practice, such diplomacy is a crucial part of the game, and competitors find themselves continually interacting and seeking relationships that they can exploit for their own benefit [source: Hinebaugh].

In this article, we'll explain Risk's rules and the different variations of the game, and how to develop a winning strategy. But first, here's a basic explanation of how the game is played.