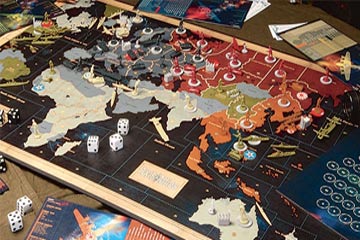 These miniatures from the Europe 1940 version of Axis & Allies shows the many different unit types available, as well as the differences between units from Germany and Britain.
Courtesy Wizards of the Coast/Avalon Hill

Axis & Allies is a board game that allows the players to simulate the epic sweep of World War II, from Japan attacking Pearl Harbor to the Allied invasion of Normandy and the eventual defeat of the Axis nations of Germany, Italy and Japan. Since the players control the nations involved, the war can change in unexpected ways and play out a variety of scenarios. What if Japan captured Pearl Harbor and went on to attack the west coast of the U.S.? What if Britain had fallen under Germany's assault? What if Russia invaded Japan?

The game was originally designed by Larry Harris in the 1970s under the name "1942." A small game publisher released it in 1981, but it was the 1984 release by Milton Bradley that put Axis & Allies (named for the two opposing forces in World War II) on department store shelves and into the living rooms of families across the U.S. Since then, the game has been revised and re-released several times along with several variant versions -- all while changing ownership several times as well. It is currently published under the Avalon Hill imprint of game company Wizards of the Coast, which is owned by Hasbro.

Through all the changes, the core of the game has remained: Fight World War II on land, sea and air, gaining territory to improve your faction's economy, allowing you to purchase more troops and conquer more territory. Your ultimate goal is to capture certain key cities, ensuring global victory. Two to five players can play, with players on the same side working together to defeat the other side. It can be quite a challenge to coordinate attacks and troop movements among three different players controlling three different nations.

War games had been around for decades before Axis & Allies showed up, but the game was innovative in that it covered the entire war from a broad strategic standpoint. Also, most war games use small cardboard chits to represent units on the battlefield. Axis & Allies comes with a full complement of molded plastic miniature tanks, infantry soldiers, airplanes and battleships. The sheer visual appeal of the game went a long way toward making it so popular: In recent editions, the units are even unique to each nation, showing the actual aircraft and tanks used by the various armies.

This article will explain how to play Axis & Allies, discuss some of the rules revisions and detail some of the strategies you need to know to be successful the next time you sit down to win World War II.

How to Play Axis & Allies

The rules for Axis & Allies have changed somewhat over the years. The changes generally revolve around set-up changes, different rules for weapons research, the addition of "combined arms" and changes to the victory cities. Modern versions of the rules offer more balance between nations, but many players prefer the classic rules. Some of the variant Axis & Allies games, such as Axis & Allies: Battle of the Bulge and Axis & Allies: Miniatures differ significantly. We're going to talk about the rules common to the original Axis & Allies and revisions derived from it.

Setting up the game takes a few minutes, as each player chooses one or more nations, then lays out the plastic pieces in the appropriate territories according to the rulebook. Each nation also receives a set number of Industrial Production Certificates (IPCs). IPCs are the currency of Axis & Allies, representing the economic and industrial power required to manufacture weapons, train soldiers and research new technologies.

Play is divided into turns, each turn made up of seven phases. Each nation plays through an entire turn (all seven phases) before the next nation goes. Nations can't take action during other nations' turns, which means that even allied nations can't perform joint attacks. The game uses standard six-sided dice.

In the first phase of the game, players develop weapons. The active player spends IPCs to purchase research dice. When rolled, these offer a chance at discovering a potent technology such as longer range for aircraft, more powerful submarines or heavy bombers. This aspect of the game has changed significantly with each revision, and many players substitute their own home rules.

Players purchase units in the game's second phase. The active player spends IPCs to acquire new units. Each unit has its own cost, reflecting its strength and special abilities. Core units include infantry, tanks, fighters, bombers, aircraft carriers, battleships, transports, submarines and industrial complexes. Later versions add artillery, destroyers, cruisers, anti-aircraft guns, naval bases, tactical bombers and mechanized infantry. Note that units aren't placed on the board at this time, only purchased and set aside for later in the turn.

What happens when it's time to fight? Find out on the next page. 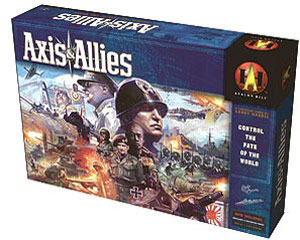 Axis & Allies can be frustrating at times. You'll often be forced to build your units far from where you need them, and loading all your land units onto transports to make an assault by sea is a slow process as well. Since you can't exactly sneak up on an opponent, you'll find they've stacked the territory you were planning to attack with defensive units in the meantime.

The key to success is to grind out a narrow margin of victory in every attack you make. This doesn't mean always winning a territory; it means making sure your opponent loses a greater value (in IPCs) of units than you do. And if you must sacrifice units, make sure you can hold the territory you attack so you recoup the IPC loss. Doing this successfully involves foresight and a bit of math. It gets easier once you get used to breaking down the odds of a given battle and adding up the IPCs spent on each side, and you can evaluate every attack this way.

Many players make the mistake of failing to build enough infantry. Infantry are excellent defensive units for their cost, but they're very useful on offense as well. For one thing, you need to have them around to soak up your casualties, otherwise you'll be losing your more expensive tanks and you'll quickly fall behind in the IPC race. In many cases, the attack strength of the infantry that can be purchased for the price of a more expensive unit is greater -- they're more efficient than fighters, for example.

Learn to use combined arms. Some units work well in concert as a natural result of their cost and comparative strengths and weaknesses (infantry and tanks are both needed for a successful invasion force). One of the better rule revisions added explicit combined arms benefits. Infantry are boosted by the presence of artillery, and tactical bombers work best with fighters or tanks helping them out.

Novice players will realize quickly that the odds are somewhat stacked against the Axis. Germany has difficulty controlling the Atlantic Ocean and faces the historic problems of a two-front war, battling the U.S. and Britain on one side and Russia on the other. Quick, decisive attacks in the early game can make a huge difference and lead to Axis success.

For their part, the Allies benefit greatly from cooperation and careful planning of maneuvers and attacks. Axis cooperation is limited by the vast distance between Germany and Japan -- they seldom are able to help each other directly. On the other hand, you'll often find U.S. units positioned in Britain, making attacks on Axis-held territories on the continent. If the Allies can gain a toehold in Western Europe, they can close in on Germany like a vice.

You certainly don't need to be a genius strategist to enjoy Axis & Allies, but it's fun to pull off a thrilling victory every once in a while.