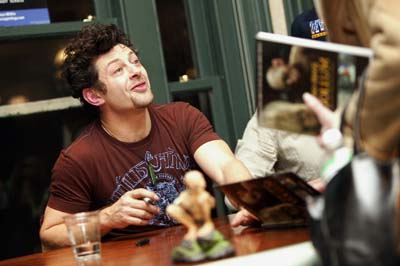 Motion-capture software was used to turn actor's Andy Serkis into the creature Gollum from the 'Lord of the Rings' trilogy.
Scott Gries/Getty Images

Half of the process of creating a computer-animated feature film has nothing to do with computers. First, the filmmakers write a treatment, which is a rough sketch of the story. When they've settled on all of the story beats -- major plot points -- they're ready to create a storyboard of the film. The storyboard is a 2-D, comic-book-style rendering of each scene in the movie along with some jokes and snippets of important dialogue [source: Pixar]. During the storyboarding process, the script is polished and the filmmakers can start to see how the scenes will work visually.

The next step is to have the voice actors come in and record all of their lines. Using the actors' recorded dialogue, the filmmakers assemble a video animated only with the storyboard drawings. After further editing, re-writing, and re-recording of dialogue, the real animation is ready to begin.

The art department now designs all the characters, major set locations, props and color palettes for the film. The characters and props are modeled in 3-D or scanned into the computers from clay models. At Pixar, each character is equipped with hundreds of avars, little hinges that allow the animators to move specific parts of the character's body. Woody from "Toy Story," for example, had over 100 avars on his face alone [source: Pixar].

The next step is to create all of the 3-D sets, painstakingly dressed with all of the details that bring the virtual world to life. Then the characters are placed on the set in a process called blocking. The director and lead animators block the key character positions and camera angles for each and every shot of the movie.

Now teams of animators are each assigned short snippets of scenes. They take the blocking instructions and create their own more detailed key frames. Then they begin the tweening process. The computer handles a lot of the interpolation -- calculating the best way to tween two key frames -- but the artist often has to tweak the results so they look even more lifelike. It's common for an animator to re-do a single short animated sequence several times before the director or lead animator is satisfied [source: Pixar].

High-quality animated films are produced at a frame rate of 24 frames per second (fps). For a 90 minute film, that's nearly 130,000 frames of animation. At Pixar, for example, an individual animator is expected to produce 100 frames of animation a week [source: Pixar].

Now the characters and props are given surface texture and color. They're dressed with clothing that wrinkles and flows naturally with body movements, hair and fur that waves in the virtual breeze, and skin that looks real enough to touch. Then it's time to light the scenes, using ambient, omnidirectional and spotlights to create depth, shadows and moods.

The final step of the process is called rendering. Using powerful computers, all of the digital information that the animators have created -- character models, key frames, tweens, textures, colors, sets, props, lighting, digital matte paintings, et cetera -- is assembled into a single frame of film. Even with the incredible computing power of a company like Pixar, it takes an average of six hours to render one frame of an animated film [source: Pixar]. That's over 88 years of rendering for a 90-minute film. Good thing they can render more than one frame at a time.

We hope this has been a helpful introduction to the world of computer animation. For even more information on digital filmmaking, special effects and related topics, check out the links below.