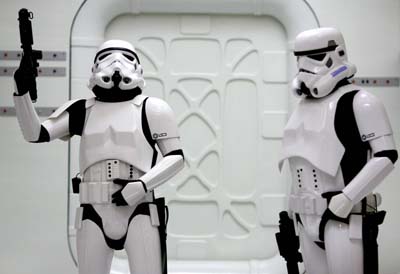 Using computer software programs, animators will paint backgrounds to give a realistic appearance to a scene.
Carl DeSouza/AFP/Getty Images

Since the earliest days of motion pictures, filmmakers have looked for ways to convincingly (and inexpensively!) recreate vast, realistic landscapes and backdrops without having to actually film on-location at the peak of Mt. Everest or the moon's surface.

The most common solution is a production effect called matte painting. In traditional matte painting, artists relied on several techniques, from simply painting a huge fake backdrop (think of those old westerns with the cactus and sunset in the distance) to carefully replacing parts of a shot with scenes painted on glass.

For live action films, digital matte painters often get the assignment of creating a historically accurate backdrop for a scene. In "The Last Samurai," for example, the script called for Tom Cruise's character to wander out of a bar and into the streets of San Francisco, circa 1876. First, the live actors performed their scene in front of a green or blue screen. Then the digital matte painters consulted archive photos of the city to model a 3-D skyline. They took digital photos of a beautiful sunset and placed it behind their model cityscape. Then they created a computer-generated trolley that would clank down the steep street in front of the actors. (Go here for behind-the-scenes pictures and videos from Matte World Digital.)

Digital matte painters use the same techniques when creating landscapes for fully animated films, like those made by Pixar. If the characters are going to interact a lot with the virtual set, then each set element is rendered in 3-D [source: Pixar]. But for large establishing shots, or an enormous backdrop that will only be seen once, the matte painters use a combination of 2D Photoshop collages and 3D models to build realistic landscapes that fit within the style of the animated film. Pixar movies, for example, have become increasingly photorealistic without losing their "cartoony" quality. So the landscapes can't look perfectly "real." They have to be built on a color and texture palette that matches the rest of the movie.

Another technology that adds impressive realism to a digital landscape is something called a particle system [source: Vanderbilt University School of Engineering]. Particle systems use mathematical algorithms to recreate the natural movements of animated elements like smoke, fire and flocks of birds. For digital matte paintings, the animator doesn't have to draw every flame and every wisp of smoke as the city burns. He just uses the modeling software's particle tools to program how large he wants the flames to be and how dark and billowy the smoke should be. With the same controls, he can model one CG seagull and program the software to create a flock of birds that flap their wings at different paces to take slightly different paths as they soar across the sunset.

Now let's look at character modeling and animation, the heart and soul of computer animation.