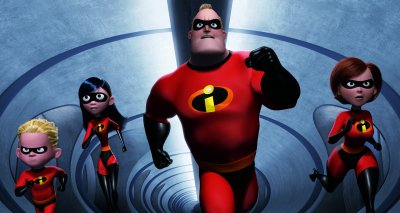 For the creative minds at Pixar, designing and animating the playthings of "Toy Story" and the cute beasties of "Monsters Inc." was child's play compared to what they faced in bringing "The Incredibles" to the screen. This latest effort, an action comedy about a family of superheroes exiled to suburbia, proved almost impossible.

"The biggest challenge is that we were dealing with human characters," says supervising technical director Rick Sayre. "Hair simulation, hair sculpting, clothing simulation and clothing patterning-there's so many components that go into pulling that off. We had the human Al in "Toy Story 2" and little Boo in "Monsters Inc." had hair and clothing, but she wasn't in every shot and she was just one character. Here, we had to essentially invent from the ground up the way we animate characters and rig them."

Rigging, explains 17-year Pixar veteran Sayre, "is how you set the character up, kind of like a puppet or a performance, so the animators can manipulate it and yet it will move in a convincing way. Humans are really complicated. You have bones that float and the shoulder is not even a single joint. To do humans convincingly, you need to essentially simulate the way skin moves over fat and muscle and is driven by bones and slides against bones. That verisimilitude is what tells you it's human and not a puppet or a toy. You also want to be able to caricature. So on top of that we added squash and stretch for each bone--bends and bows where you can change what the flesh is doing." 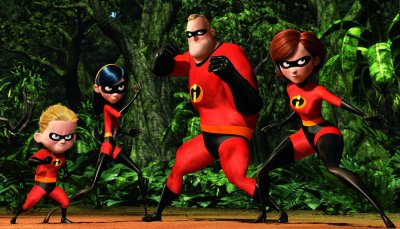 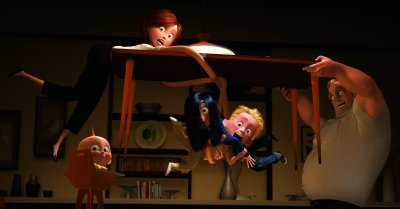 Most moviegoers will be able to identify Craig T. Nelson as the voice of Bob/Mr. Incredible, Samuel L. Jackson as his buddy Frozone, and Holly Hunter as Helen/Elastigirl, while fans of NPR radio will recognize Violet's voice as that of commentator Sarah Vowell.

Writer-director Brad Bird got his first choices for these roles, but was unable to cast Edna Mode, the German-Japanese superhero costume designer, "a tiny character that dominates the room." Bird ended up doing the voice himself, and the result is hilarious.

Bird, best known for the critically-acclaimed "The Iron Giant," got the idea for "The Incredbles" a dozen years ago, at a time when he struggled with the conflict between the demands of career and family. "The goal was to make the family based on archetypes. I made the dad really strong. Moms are always pulled in different directions so I had her stretch. Teenage girls in particular are self-conscious, so Violet's invisible and has force fields. Ten-year-old boys are hyperactive energy balls that ricochet off the walls, so I had Dash have super speed," he explains. He named the baby Jack-Jack after his own middle son, then a toddler, who's 12 now.

While there were some slight changes in the film's opening, as well as its villain, "otherwise it's it's pretty much the same story arc that I came to Pixar with," observes Bird, who brought it to the CG studio in 2000. "The rest was the usual process of making a movie where you're trying to strengthen some things, make something clearer, work with it."

Sayre looks forward to the time when achieving computer graphic goals becomes more effortless and simulation will be more directable. "The computer is like an idiot savant. It's completely happy to show you something that no artist in their right mind would ever do -- it just doesn't know any better. Getting to the point where the computer knows better, that may be the next thing," he believes.

An "Incredibles" sequel may be another possibility, but for Bird, it comes with conditions. "There's a tendency that any movie that's a hit is suddenly considered a franchise, which I think is ridiculous. Some movies lend themselves to continuing, and others don't. If you do a film with the original filmmakers, and those original filmmakers believe that they can equal or better the one that everyone likes, then let's go. But it would have to be that."