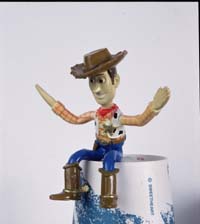 Animators will build molds to animate a character's movement like this one created for "Toy Story."
© Ted Thai/Time Life Pictures/Getty Images

The process of creating a computer-animated character begins as it always has, with a pencil and paper. The art department submits hundreds of character sketches based on discussions with the writers and director. Once they settle on a design for a particular character, it's the animator's job to model the character in 3-D on the computer. Sometimes the art department will create a 3-D clay model of the character and then scan it into the computer to create a wireframe model.

Modeling characters isn't that different than modeling an object. The hard part is animating them. The human eye is very sensitive to unnatural or jerky movements. Walking, for example, is an extremely complicated movement that requires just about every part of the body to participate in a single, fluid motion.

One solution is to build an animated character as if it had an internal skeleton. This is called an articulated model [source: Vanderbilt University School of Engineering]. Basically, the character is built upon bones and joints that act according to a hierarchy. There are joints at the top of the hierarchy -- elbows, for example -- that control the movement of body parts that are lower in the hierarchy -- upper arm, forearm and hand, in this case. In this hierarchal structure, the animator only has to move one joint or body part, and the lower joints and body parts assume their correct position, like pulling a marionette's strings.

This brings us back to key framing and tweening. When animating a character, the animator only poses the character in key positions and lets the computer fill in the "in between" frames. This is made even easier by the articulated model and something called inverse kinematics [source: Vanderbilt University School of Engineering].

Let's say the animator wants to make the character raise his hand. Since all of the character's body parts are connected in a hierarchy, all the animator has to do is set a key frame with the character's hand in the desired position. The computer will not only fill in the movement of the hand, but of all the parts connected to the hand (arm, elbow, shoulder, et cetera). Animation software often comes with pre-loaded inverse kinematic models for walking and other common character movements.

Another popular method for creating smooth, realistic character movements is through motion capture. With motion capture, a live actor puts on a special suit embedded with dozens of sensors. The sensors rest on key parts of the body, like limbs and joints. The computer tracks and records the movements of the sensors and can use that data in different ways. The data can be used to directly control the limbs and joints of an animated character. In this sense, the live actor is moving the animated character like a puppet, even in real time. Or the sensor data can simply be used as a guide over which a character is modeled and animated.

Now let's look at the overall animation process for a feature film.