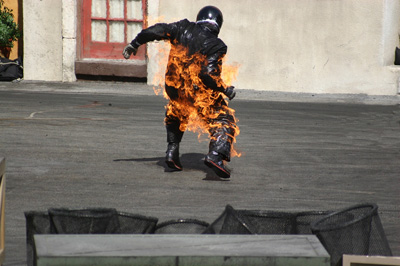 Being set on fire is one of the most dangerous things a stuntman can do.
Photo courtesy of Dreamstime

Any scene where fire is involved is a dangerous one.  Let's take a look at some of the most common stunts that include fire.

Scenes in which someone is actually set on fire are among the most dangerous ever filmed. The stuntman wears several layers of protective clothing, including fire-resistant materials like asbestos. Special gloves and a hood cover the hands and head. In most burn scenes, the hood is clearly evident, though its appearance can be minimized by good editing. Inside the hood is a small breathing apparatus connected to a small oxygen tank. The performer is then coated in a specially prepared flammable gel. They are not simply doused in gasoline -- that would be suicidal. Before the burn is lit, multiple extinguishers and paramedics must be at the scene. The burn itself is carefully timed.

Pyrotechnic crews set up explosions, which are built to produce spectacular fireballs. The detonations are timed to go along with the rest of the action in the scene, and can be made to look closer to the action than they are by forced perspective. They can also be filmed separately and inserted into the show via green-screen, digital or other special effects technology. If someone is flung into the air by the explosion, a pneumatic air ram is used to propel them. The air pressure can be dialed in to create the exact amount of force needed for the scene.

Stunt driving is a very specialized skill. Cars used in stunt scenes aren't "off the showroom floor" stock models. They're modified with added safety equipment such as a roll cage and on-board fire extinguishers, rigs for placing cameras and any gear needed to accomplish the stunt itself. If the car needs to flip or jump, a large pneumatic air ram is bolted into the car. If the ram points down, it can be triggered by the driver to fire a pole at the ground, propelling the car into a flip. An air ram pointing backward can launch a car into an impressive jump.  While not all car chases and crashes involve fire, many will end with the car crashing and causing a huge explosion or catching on fire.